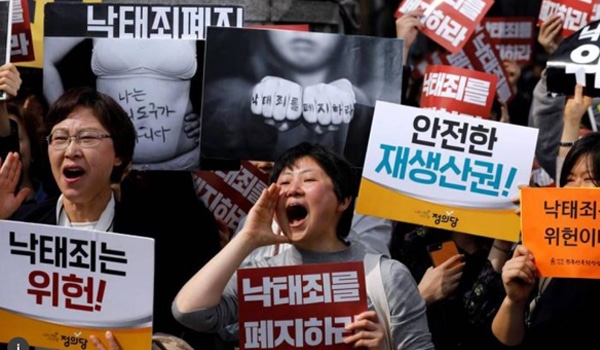 At the beginning of October 2020, the Ministry of Justice made a proposal that would allow all abortions up to 14 weeks with no criminal charges, criminalise some abortions with fines or imprisonment between 14 and 24 weeks except in cases of risk to the woman’s health, severe birth and genetic disorders, rape/incest, and social and economic reasons, and criminalise all abortions after 24 weeks. It also allows the use of medical abortion pills.

Many Korean women responded to the proposal with anger and demanded that all criminalisation be removed from the proposed new law. Any law should focus on how to safely provide the procedure, the Joint Action for Reproductive Justice in Seoul said in a statement. Reps. Kwon In-sook and Park Ju-min of the ruling Democratic Party said they planned to propose bills to scrap anti-abortion provisions in the Criminal Act in response. Rep. Kwon In-sook pointed to international trends that focus on support and protection of the reproductive rights of pregnant women rather than punishment.

Lawyers for a Democratic Society, a progressive lawyers group, said the government’s proposed reform still infringes fundamental rights under the Constitution. A petition calling for outright abolition of the current anti-abortion law and a guarantee of women’s reproductive rights was submitted to the National Assembly on 5 October 2020, with over 43,800 signatures. To force a debate, however, 100,000 signatures were needed.

A number of women who had abortions shared their experiences on social media with the hashtag #ihadanabortion, a movement initiated by movie director Bora Lee-Kil, who has been vocal on the issue.