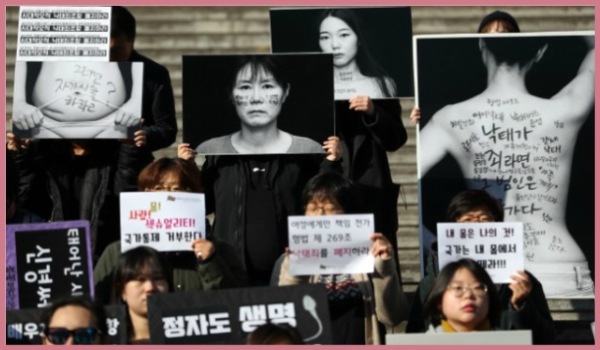 The South Korean president Moon Jae-in’s office said on Sunday that it will begin a review on the country’s 64-year-old law to ban abortion. The announcement came after more than 230,000 South Koreans filed a petition calling for the abolition of the law.

South Korea criminalized abortion in 1953 when its leaders wanted to boost the population and build an army powerful enough to fend off its rival North Korea. The law was revised to allow abortion if there is a risk to the woman’s health, in case of a sexual crime or severe fetal anomaly. But public health experts were unable to get further reforms to the law due to anti-abortion opposition and a pronatalist population policy.

The president’s office said the government will conduct research next year on the country’s abortion cases for the first time since 2010. “Based on the outcome from the research, we expect to move relevant discussions one step forward,” Cho Kuk, the senior presidential secretary for civil affairs, said in a statement. Cho said South Korea’s Constitutional Court, which in 2012 upheld the anti-abortion law, will again review the legislation and will make efforts to promote public debate on the issue. According to the most recent figures, an estimated 16,900 abortions took place in 2010, and only 6% of them were done legally, he said. According to the Economist, 36% of South Koreans think abortion should be a crime, a significant decrease from 53% in 2010.

Doctors who provide abortions or who provide South Korean women with abortion pills can face up to two years in prison and lose their licenses, but few doctors have ever been prosecuted. In an uneasy compromise, it seems law enforcement officials have been willing to look the other way as long as qualified doctors perform the operation.

Meanwhile, according to South China Morning Post, there is an illegal trade in abortion pills that has been steadily growing in South Korea. Law enforcement agencies try to crack down on black markets, but the trafficking continues as pills can be accessed with a few clicks on foreign search engines. The newspaper also says there have been many reports of Chinese selling fake pills via social media and online stores that caused serious side effects in several women. In 2015, the Seoul Central District Court jailed someone for distributing fake medication to more than 100 women in South Korea.