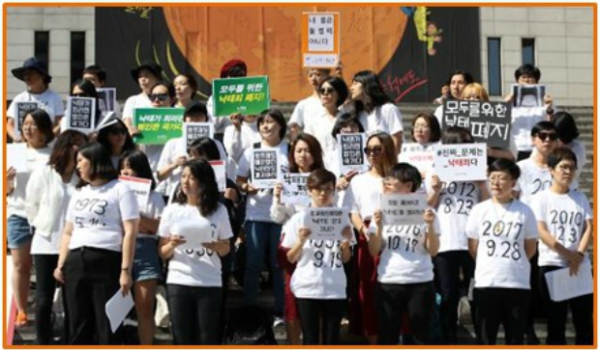 In September this year, a petition on a government website called on President Moon Jae-in to  amend the abortion law and approve the sale of mifepristone. The government has promised to respond to any petition that gains more than 200,000 signatures in a month. This petition got 235,000 signatories. A recent survey of 516 adults found that 51.9% supported the petition. The NGO Womenlink said they were “stunned by the fervour” of those who signed.

Since 1953 abortion has been legal only in cases of risk to the woman’s life, rape and severe fetal anomalies. Government turned a blind eye, however, and abortion was readily provided until 2010 when religious groups began campaigning against it and anti-abortion doctors began reporting hospitals offering abortions to the police. The president at the time created a task force to enforce the law, but they failed to reverse falling fertility rates.

Last year, women’s groups demonstrated for better abortion law and practice, just after the Ministry of Health withdrew a bill increasing the penalties against abortion providers, due to protests by doctors and women’s groups. Now the Constitutional Court is due to rule on a challenge to the law, on the grounds that it is an infringement of personal liberty.

Lee Jung-mi of the Justice Party is one of the few MPs to have spoken out in favour of scrapping the law. While conversations about abortion in the National Assembly have barely begun, the success of the petition is a beginning.