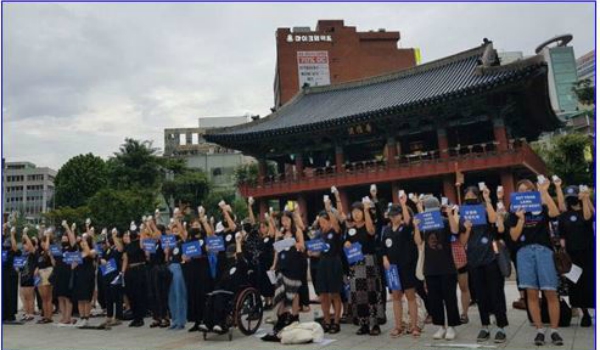 The 1953 abortion law in South Korea, allows abortion in cases of rape, which must be proved by the woman, incest and when her health is at risk, in which case the partner’s consent is required. Initiated by the women’s movement, this law is under review by the country’s Constitutional Court. But the Court recently reported their ruling was delayed indefinitely. A news story reported that early in August, the Health Ministry issued revised regulations toughening the punishment for doctors who provide abortions, and enabling medical authorities to suspend their licenses for one month if they do abortions, without requiring a criminal conviction. The Ministry also described abortion as an ‘immoral medical action’, along with sexually assaulting patients.

In protest, on 17 August, nearly 2,500 members of the Korean College of Obstetrics & Gynaecology refused to carry out abortions. The doctors say the Ministry’s move is still crushing their livelihood. Their vice-chairwoman, Lee Young-kyu, told Agence France Presse that labelling the doctors as immoral was “simply appalling”. “Patients who seek abortions are often poor or underage,” she said. “If women are forced to give birth in these circumstances, it puts a question mark on whether that is moral. We are not asking to legalise abortion. It’s about giving pregnant women a right to choose.”

Also in response, on 26 August some 125 women, the same number who have abortions every hour in South Korea, took vitamin pills in a performance signifying using medical abortion pills. “Calling abortions immoral medical acts? Are women not included when the Ministry talks about public health?” Mina Kim, 26, a member of the feminist group Femidangdang, told the Korea Times. They expect prices for abortions to rise, which has happened in the past as well.

A recent survey by the Korean Women’s Development Institute showed one in five Korean women has had an abortion. The latest official figure from the Ministry of Health and Welfare says over 169,000 abortions, of which 94% were illegal, took place in 2010. But doctors’ groups estimate some 3,000 abortions take place every day.

As the controversy deepened, Health Minister Park Neung-hoo announced on 28 August that the regulation won’t be enforced until the Constitutional Court’s decision on the abortion ban. However, the doctors are maintaining their boycott, demanding a more ‘fundamental solution’. On 30 August they said: “We cannot accept the decision to label women and doctors as immoral with an outdated abortion ban.”