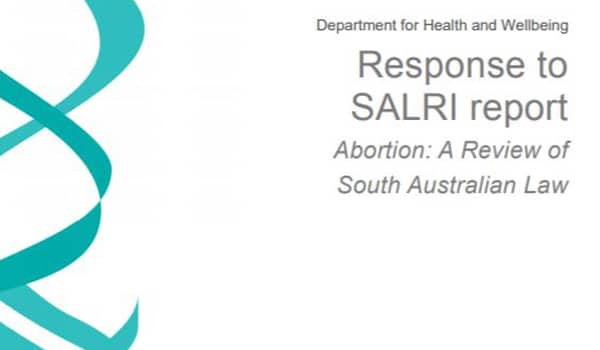 Abortion: A Review of South Australian Law and Practice

Department for Health and Wellbeing Response to SALRI reportAbortion: A Review of South Australian Law, November 2019

The South Australian Law Reform Institute (SALRI), based at theUniversity of Adelaide, recommended major changes to South Australian abortionlaws in a 560-page report to the Attorney General with 66 recommendations. The reportrecommended that abortion be decriminalised and treated as a health issue, with a woman’s autonomy and best healthcare respected and promoted.

It proposed twoalternative models. First author John Williams said: “The first model is thatan abortion is lawful at all gestational stages with the woman’s consent and ifit is performed by an appropriate health practitioner, which mirrors the law inACT. This places decision-making responsibility with the woman and serviceavailability with the medical or health professional. The alternative model,which reflects current clinical practice, is that if a woman requests anabortion after 24 weeks gestation the first medical practitioner is required toconsult with at least one other medical practitioner – whilst still recognisingthe autonomy of the woman – and for both practitioners to agree that anabortion is medically appropriate. The second approach recognises thatterminations at a later stage often involve complications, distress,complexities and higher risks to a pregnant woman.”

Other recommendationsfocused on establishing safe access zones around places where services areavailable, the roles of conscientious objection and referral for healthpractitioners, removing criminal liability for the woman involved and healthpractitioners, and a new offence for abortion services provided by unqualifiedparties.

The work benefitedfrom wide-ranging consultation with the South Australian community andinterested parties, including medical and health practitioners, professionalbodies, legal experts and academics, faith groups, the disability sector,domestic violence services, Aboriginal health workers, and NGOs. People whowere both supportive of and opposed to the decriminalisation of abortion wereconsulted. SALRI received a total of 340 submissions and 2,885 responses to itsonline survey.

In a 15-page response, published in November2019, the Department for Health and Wellbeing accepted the great majority ofrecommendations, with 15 recommendations requiring deference to the Crown “forspecific legal advice to ensure the intended outcome is achieved in anyproposed new legislation”. Of the alternative models recommended by SALRI, theDepartment opted for the second one, putting the decision about abortions from24 weeks in the hands of two medical practitioners. A summary of the clinicalpractice recommendations are:

The expected impact on health services is: