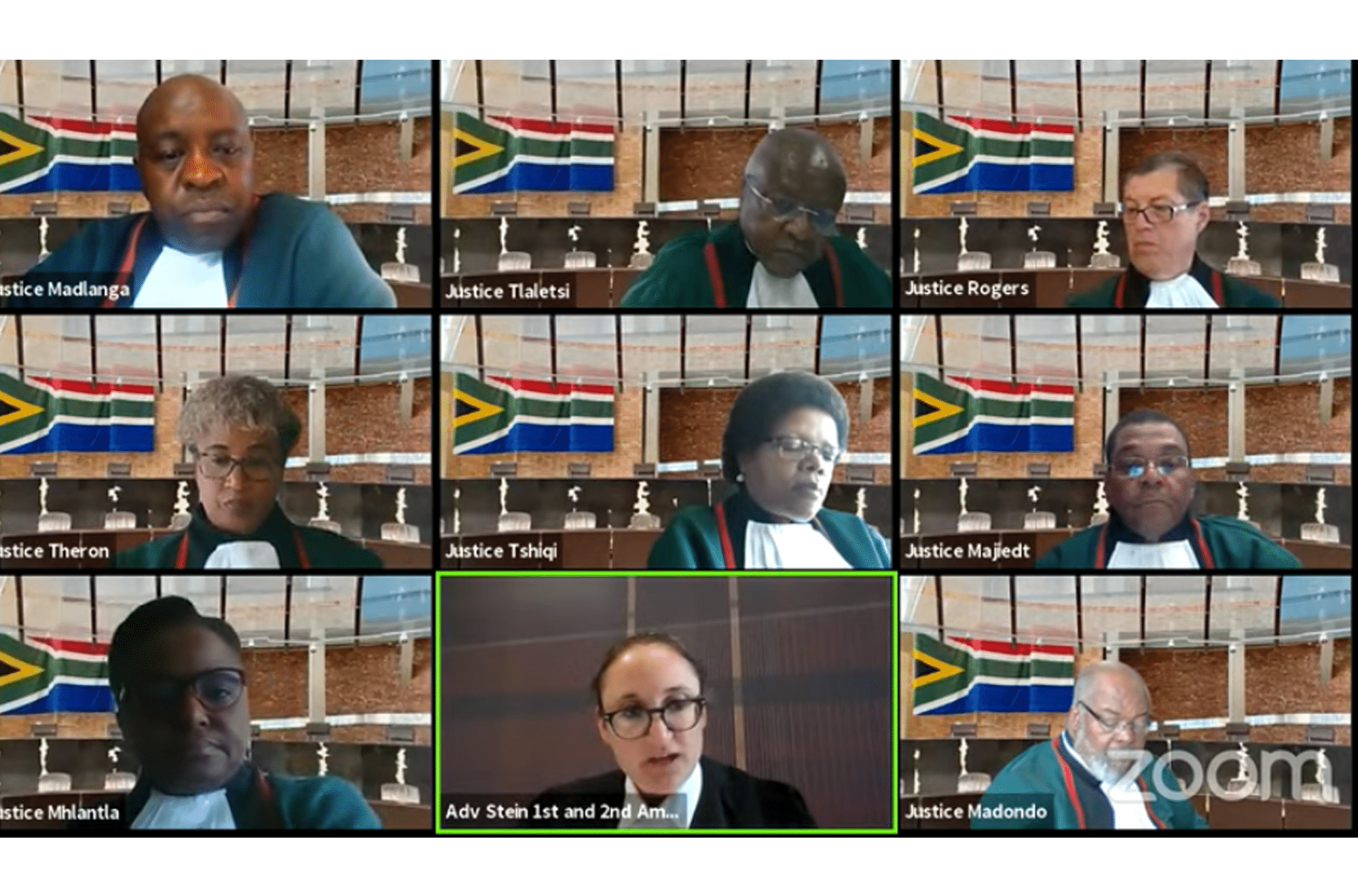 A proposal by representatives of two anti-abortion groups and the Catholic Church has made its way up the court system in South Africa to the Constitutional Court and had it first hearing on 4 November 2021 by eight justices in an initial a four-hour hearing.

The issue was whether, after a miscarriage at any point less than 26 weeks of pregnancy, the “parents of an unborn child” should have the right, though not the obligation, to bury the fetal remains, including informally (e.g. in their own garden). As it stands, the law itself does not appear to prohibit this, but in line with BADRA, the official regulations for data collection on births and deaths, it is not allowed. After all such miscarriages, the fetal remains must be incinerated in the hospital.

The lead advocate opens by saying “If we are a compassionate society, bereaved parents will be allowed to bury their child if the mother has a miscarriage.” This is allowed only beyond 26 weeks of pregnancy, not before. Before, it is considered anatomical waste, unceremoniously incinerated and discarded. This is a violation of the parents’ human dignity, it infringes on the privacy of the parents, it creates inequality between parents with a fetus over 26 weeks and others. Why should there be an apparent legal differentiation between a miscarriage and a stillbirth? Stillbirth requires burial of the fetus. Miscarriage the opposite. The advocate tells a personal story: a mother of two small boys says she feels unwell and goes into the bathroom and shuts the door. The five-year-old follows her, worried. He calls to her through the door, no reply. He opens the door and sees his mother unconscious on the floor in a pool of blood. She has miscarried. Traumatised, he manages to speak to his grandmother, who calls for help. His mother survives. But she and her husband feel deprived of the right to bury this much wanted third child, so as to express their bereavement. The lead advocate, it turns out, was that five-year-old boy, whose whole life was affected by this event.

He argues that there are several other jurisdictions that allow burial in a limited way if wished for, but except for the UK, he does not name them, and when asked for comparative legislation in the African continent, which might serve as a better example of what South Africa might do, he said he was unable to find any. He calls for the costs of burial to be applied for. This elicits a concern from one justice about the costs to hospitals, as the Minister of Home Affairs has raised the issue of the cost, considering the under-resourcing of hospitals. But the litigant then says that families could merely sign a register to take the remains home for informal burial to avoid costs. What about the fetus after abortion? He replies, this is an elective right only if the parents wish to bury the unborn child.

[Note: Each justice is able to ask questions to those speaking to the case. Most of the justices start off using the word “fetus” in their questioning but then often switch to “unborn child” because the anti-abortion presenters always talk about the “unborn child/baby” when they speak, which makes the use of ‘fetus’ uncomfortable. This tendency stops only when the last presenter, who is strongly pro-abortion rights, points out how political this usage is.]

More than one justice notes that there is no actual prohibition in the law that requires amendment; hence, they say there is no reason to change the law. But the anti-abortion advocates argue that reform is still needed, to revise the interpretation of the law, which appears to arise from the regulations on reporting of all births and deaths (BADRA).

The advocate from the Catholic Church said many people, Catholic and others, consider a fetus to be a child. He talks of double loss: the death by miscarriage and then the loss of the possibility of burying the fetus. Yet you can go to the veterinarian, he says, and pay a small fee to get your pet’s remains in a box and bury your pet. When there is a fetal death, one justice says, cooperation of medical staff would be needed to ensure the fetus is collected and stored for delivery to the parents. But one of the anti-abortion advocates says they are not asking for the state to fund the burial, so they do not see this as a resource issue. This is challenged later.

The head justice is concerned about the uncertain legal and other implications of making this change. In his response, the Catholic Church representative says that a lower court has ordered that there should be declared a right to bury a fetus at less than 26 weeks gestation. So the Constitutional Court will have either to confirm that order or reverse it if they do not agree. The Catholic Church representative then points out two bylaws in which a certificate of burial is required for every burial in BADRA). He rejects the claims of two pro-choice amicus briefs that this change would in any way reduce access to abortion, and says the Church is not opposing abortion by this (though they are in fact claiming rights for unviable, miscarried fetuses here). He then notes that one of the amicus briefs mentions that the combined number of miscarriages + induced abortions before 26 weeks of pregnancy, which may theoretically at least, all lead to a request to receive the remains for burial in South Africa, is some 450,000 per year. The advocate’s response is that there is no evidence of how many of these would lead to a request to bury, and that it could be a tiny percentage.

The advocate for the second amicus talks about dignity and why it is wrong to treat deceased fetuses as if they have no worth. That it is not just the needs of the parents, but of the whole society that are involved. He says an induced abortion even after 26 weeks would not give the fetus the right to burial. He argues that a fetus is human  (from conception), and a dead fetus is a dead human with a dead human body. He adds that even though a pre-viable baby cannot become a viable life, it is still a human life. He also says that throughout pregnancy there is the potential of viable life.

The advocate Advocate Nkosi Thomas, says that after 26 weeks a fetus is considered viable, so the only difference between a fetus before and after 26 weeks is where it is sitting, in utero or in the world (sic). Yet some minutes later she also acknowledges the conflict that arises regarding the “right to life” because of abortion. One justice says it appears to him that the rights she is talking about granting would accrue to the fetus, not to the bereaved parents, as was earlier argued Advocate d’Oliveira. Advocate Nkosi Thomas talks about the definition of a corpse and that the legal definition mentions both a stillbirth and “a fetus”, without further defining “fetus”.

Advocate Stein, the only advocate to present a pro-choice/women’s rights stance, argues that the right to bury every fetus would restrict women’s right to bodily autonomy and access to abortion. She addresses 1) the current limitations on and unequal access to public abortion facilities, the failure to regulate conscientious objection and the imposition of directive counselling, which could create even worse barriers by pushing the woman to accept the right of burial and to try and discourage abortion, and even that pressure could be put on the woman to agree to a burial when she does not want it, 2) how the blanket fetal right to burial will affect access to an abortion in state facilities, because of the added burden placed on those facilities to address requests for burial, creating an “undue burden”. Lastly, she insists on the resources aspect, in that the cost involved in allowing fetal burial rights is more than just for the burial but also administrative costs and staff time to manage this.

Moreover, the suggestion by the anti-abortion proponents of the change in practice, that all that would be involved would be to put the fetal remains in a box and hand it over, is clearly not the case. This becomes an issue especially in relation to medical abortion up to 12 weeks, in which it would be the woman herself would has to identify and separate out the fetal remains after she miscarries and put them in a box in preparation for burial. That is difficult to do, and could lead to a lack of dignity. She differentiates between women who can manage this and those who cannot. She uses other judgments to show that it is only acceptable to limit certain rights if more compelling rights are being restricted. The applicants have not shown this.

She again quotes a US case in which the issue of creating an “undue burden” on access to abortion cannot be justified under constitutional law. She therefore proposes that any judgment that includes fetuses before 26 weeks should exclude the fetuses of women who have chosen to have an abortion. If this is not acceptable, she proposes that the decision to allow women to request the fetus for burial should be confidential. Secondly, if burial of fetal remains after an abortion is allowed, the consent of the male partner should not be required, as part of a wider rule that third party consent is never acceptable. She closes on the importance of attention to language in any changes or additions to regulations, to ensure they do not reflect specific political views, such as ascribing personhood to fetuses. Third, she proposes to exclude women up to 12 weeks of pregnancy who use medical abortion pills to end their pregnancies because at this stage it is very difficult to identify let alone separate out fetal remains, particularly for women who abort at home. For women at 13+ weeks of pregnancy who have a surgical abortion, resources should be provided by the state to allow the fetal remains to be collected into a container for the woman to take away, and not expect the burden to be borne by the facility or women themselves. Lastly, she argues that any request for fetal burial must come from the woman alone, and not be offered or even suggested by anyone else.

It was not stated in this video what would happen next, or when, but the hearing will continue.

[It is well worth listening to this whole video as the presentation of both anti-abortion and pro-women’s rights arguments are well thought out and all the anti-abortion advocates’ arguments are convincing, at least until Advocate Stein presents. Riveting! Marge Berer]