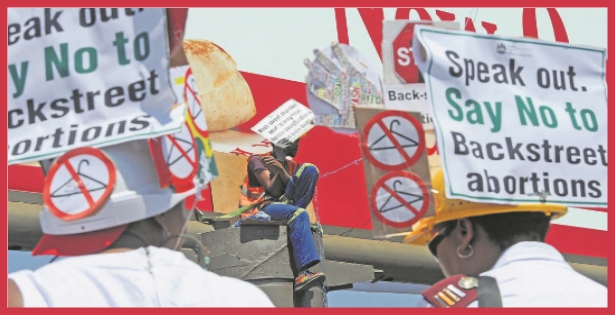 A draft bill by an anti-abortion Christian party proposes to amend the Choice on Termination of Pregnancy Act 1996 to remove clauses that allow women to terminate pregnancies on socioeconomic grounds, which would cut out the great majority of abortions. It also seeks to remove provision for abortions after 20 weeks, e.g. for fetal abnormality, even though 60% of all pregnant women in South Africa do not even attend an antenatal clinic before their 20th week of pregnancy in order to have antenatal screening. Moreover, the bill would require anyone seeking an abortion to undergo an ultrasound scan first and healthcare providers to affix a photo of the ultrasound to the patient consent form, supposedly to assist women to make “an informed choice”.

The Christian party got these ideas from a US-based anti-abortion doctors group that has South African members.

Indira Govender, a rural doctor and reproductive health activist in the public sector warns that ultrasound machines and the healthcare workers trained to use them are mostly found in major hospitals, not at local clinics that are the first place people seek out care. As if there were not far too many backstreet abortions in South Africa already, in spite of the progressive law, Govender cautions that these reforms could push even more to seek out backstreet abortions.

The Christian party claims that the 1996 legislation was forced on South Africans. They also claim that “many” congenital abnormalities can be corrected before or after birth with modern technology. Govender says, however, that even where this is possible for some birth defects late in pregnancy, the surgical skills needed are scarce in South Africa. “You can count the number of paediatric surgeons on your hand that are available in the public sector,” she said. No response to these rebuttals was published.