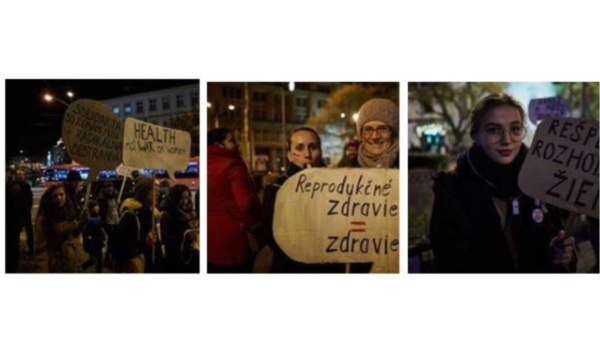 As part of the international campaign of 16 days of activism against violence against women civil society in Slovakia gathered at a protest and march across Bratislava to voice their demands and protest against structural gender-based violence, especially any steps limiting access to abortion. The march was called Nebudeme ticho! (We won´t keep quiet!) and was organised by Moznost Volby, ASPEKT, Bratislava bez náckov and Povstanie pokračuje.

In May 2018, the far-right political party in the Parliament proposed an amendment to the abortion law. According to the new law, abortion would be accessible only in three cases: if woman´s life is in danger; if pregnancy was a result of crime and in cases of fetal damage. Only women with Slovak citizenship would be allowed to get abortion in Slovakia under the proposed law. The amendment was supported by the Catholic Church and some conservative politicians. The law did not get a second reading but not because of the content but because of the fascist political party itself. Other parties did not want to be associated with this group. However, as a result of this discussion an agreement among conservative politicians came about – they promised to prepare a new law, the one that would connect politicians in the coalition and opposition in the Parliament. In September, there was another law put forward – the content and consequences would be the same as in the first case, just the explanation and language of the law had been changed. The discourse moved from creating an image of “irresponsible women who go for an abortion to protect their career and decadent lifestyle” to the concept of “protection” – conservative politicians were about to protect women from abortions. The negative consequences for women, however, would be the same, the language was the only shift. In both cases, the inspiration was the Polish abortion law. The second iteration did not make it to the first reading in the Parliament for technical reasons (there must be a gap of six months between the readings of two laws on the same issue). But this means that in February/March 2019 a new draft law can be expected.

SOURCES: ASTRA solidarity statement with Slovakia, ASTRA CEE Bulletin on Sexual and Reproductive Health and Rights No 01 (180) 2019 ; Photos from the protest