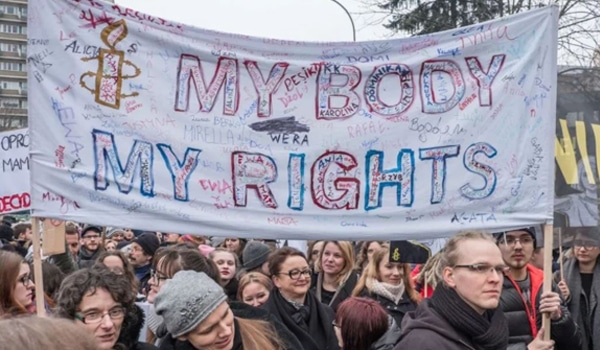 Abortions in Slovakia is currently legal on request until the 12th week of pregnancy. The latest opinion polls show that only a minority of the Slovak population would be in favour of stricter abortion regulations. Despite that, six anti-abortion bills were tabled in 2019, none of which was passed, and since the election of the largest Christian-conservative majority in years, there are now another several bills being looked at by the parliament. Thus, there are protests in the streets, as in the above photo.

This week, two letters were sent to the Slovak parliament, expressing concern about efforts to restrict the law. One was sent by the Europe Commissioner for Human Rights (link below). The other was an open letter signed by a group of 111 NGOs and women’s rights organisations, urging Slovak lawmakers not to restrict abortion rights and expressing “deep concern” that these legislative proposals would “harm women’s health and well-being and contravene international public health guidelines”. Here is the first part of that letter, which was coordinated by the Center for Reproductive Rights:

TO: Members of the National Council of the Slovak Republic, 7 September 2020

“We are writing on behalf of 111 organizations to express our deep concern regarding current threats to reproductive rights in Slovakia. At this time Parliament is debating draft legislation that if adopted would impose new barriers to accessing lawful abortion care, harm women’s health and well-being, and undermine their decision-making and privacy. It would also force doctors to act in conflict with their professional obligations to their patients. If enacted, the legislation will create dangerous chilling effects on the provision of lawful abortion care in Slovakia, and increase the harmful stigma surrounding abortion.

“The draft legislation seeks to double the mandatory waiting period currently required before accessing abortion on request and extend its application, impose a new layer of medical authorization requirements for abortion on health grounds, and introduce a requirement obliging women to state the reasons for seeking an abortion and to provide other private information when requesting an abortion. Such information would then be transmitted to the National Health Information Center. The draft legislation also seeks to restrict the information that medical professionals can provide publicly about abortion services by prohibiting so-called “advertising” on abortion, and to strengthen the dissuasive nature of the mandatory information doctors are required to provide to women seeking abortion.

“Our organizations are deeply concerned by these proposals. If adopted, they will harm women’s health and well-being and contravene international public health guidelines, clinical best practices and Slovakia’s international human rights obligations.

“The World Health Organization (WHO) has outlined that countries should ensure that women’s decisions to access lawful abortion care are respected and that abortion care is “delivered in a way that respects a woman’s dignity, guarantees her right to privacy and is sensitive to her needs and perspectives.” International human rights mechanisms have stressed that states must ensure the availability, accessibility and quality of abortion services in line with the WHO guidelines. They have called on states, including Slovakia, to remove barriers to safe and lawful abortion, including mandatory waiting periods, mandatory counseling and third-party authorization requirements. In addition, the European Court of Human Rights has held that “[o]nce the legislature decides to allow abortion, it must not structure its legal framework in a way which would limit real possibilities to obtain it”5 and has underscored that European states have “a positive obligation to create a procedural framework enabling a pregnant woman to exercise her right of access to lawful abortion.”

[The letter continues by giving details of how each of the bills restrictive clauses will create difficulties for women to access abortions:

FULL TEXT OF THE OPEN LETTER AND LIST OF SIGNATORIES

LETTER FROM THE EUROPEAN COMMISSIONER FOR HUMAN RIGHTS