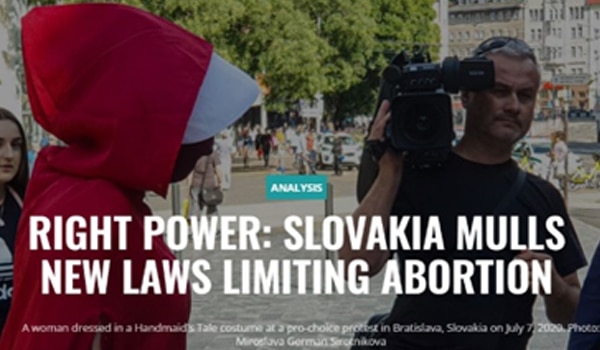 On 13 July 2020, a journalist from Balkan Insight wrote: “An economic crisis looms and the coronavirus pandemic is ongoing – but the most pressing issue on the minds of many Slovak lawmakers is limiting women’s reproductive rights. Public debate on this issue has polarised society and triggered outrage among women’s rights activists in the past few weeks. Both the activists and most experts say that Slovakia already has a low abortion rate, and note that public support for fresh changes is low. Others insist that parliament should deal with other, more urgent, issues rather than abortion, such as the ailing economy and the still looming COVID-19 pandemic.”

Last year, six anti-abortion bills were tabled. They were all rejected. A new group of four appeared this year; the one that passed was among them, introduced by a member of the ruling majority. It was not the worst of the lot, at least.The vote was taken on 14 July 2020; its second reading will be in September. Prime Minister Igor Matovic allowed MPs to vote individually. The bill increases the mandatory waiting period between the request for abortion and the abortion itself from 48 to 96 hours. It also requires certificates from two different doctors, instead of one, for a therapeutic abortion in the event of fetal anomalies. It is being described as a new step in the decline of the right to abortion in Central Europe.

“This is the 11th bill in two years on this subject. Each time, they do not try to ban abortion completely, but to restrict it piece by piece,” reported one of the activists from the “We will not remain silent” initiative, a group of anonymous feminists. They have organised demonstrations of several hundred people in the streets of major Slovak cities against all the bills that were tabled.

The woman MP who tabled the bill, who is described as the head of a sort of Christian caucus, said the aim was to give women more time to make a decision without being put under time pressure. But, as the representative of the feminist group said: “In fact, she wants to pressure women to have children. Women don’t need more time for reflection; mostly they already know what they want. Women in rural areas will also have a very hard time finding a second doctor for a signature.” This MP’s real aim seems to be to make everyone think abortion is bad and is violence against children.

The rate of abortions has been dropping in Slovakia, but not because women have decided they want more children. More and more women have been going to neighbouring countries for abortions. This is likely to increase, if this bill is passed into law on its second reading.