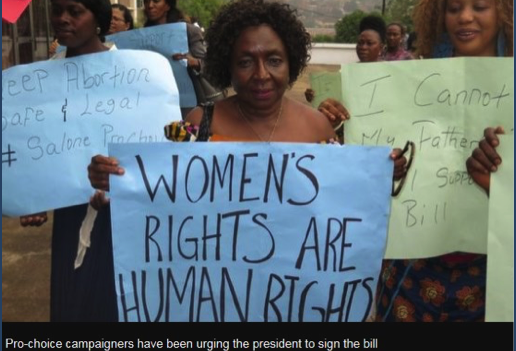 In mid-March 2016, Sierra Leone’s President Ernest Bai Koroma again refused to sign the law legalising abortion, saying it should be put to a referendum. It was unanimously passed by MPs in December, but President Koroma refused to sign it after protests by religious leaders. Apparently, he expressed concern that the law went further than the Maputo Protocol. After consultations, the Parliament voted in support of the law unanimously and returned it to him in February 2016, unaltered for his signature.

The new law allows women to terminate a pregnancy on request up to 12 weeks and in cases of incest, rape and fetal impairment up to 24 weeks. Abortion was previously illegal in Sierra Leone under any circumstances.

The BBC’s Umaru Fofana in Freetown says the abortion issue has led to heated debates and protests on both sides.

Under Sierra Leone’s current Constitution, the President cannot veto a bill which has received at least a two-thirds majority in Parliament. The Speaker of the House could sign the Safe Abortion Act into law instead, but the BBC correspondent says he is highly unlikely to do so as he comes from the President’s party.