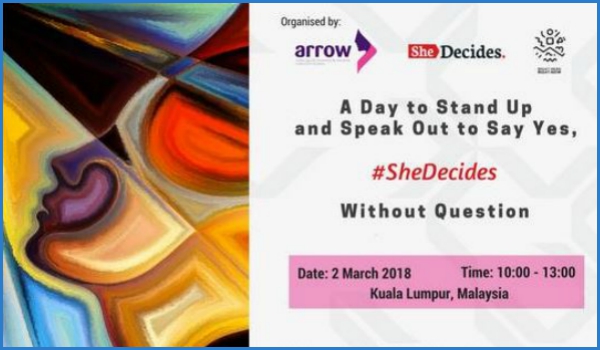 SheDecides has compiled a list of global events being organised in all world regions. Countdown Europe 2030 report that in Europe, the Swedish Deputy Prime Minister is publishing an opinion piece in Sweden’s largest morning newspaper; Rutgers in the Netherlands are organizing a debate in Amsterdam to raise the interest and solidarity of young Dutch people; Sensoa in Belgium are hosting an event in the federal Parliament around SRHR in emergencies; and the European Commission are organising an infopoint meeting in Brussels to intersect with their Spotlight Initiative.

In Africa, the Danish government, together with South Africa, are hosting a SheDecides champions flagship event for youth leaders, parliamentarians and ministers from East and Southern Africa, to encourage more support for SheDecides, and identify concrete steps forward to change laws and policies in their countries. And the Minister of Development Cooperation from Belgium will hold a roundtable in Dakar, together with the government of Senegal. In Asia, ARROW are organizing a speakout.

Countdown Europe 2030 report that of the funding pledged a year ago to counter the effects of the Global Gag Rule, some of the pledges were new funds (from Sweden, Netherlands, Denmark, Bel­gium), while others were funding re-allocated from other ODA budget lines (Norway, Netherlands), or part of already planned SRHR funding (Finland). Their report did not indicate how much of the total was in fact new money, a question that has been asked throughout the past year.

“SheDecides funding is going through the existing funding streams of the respective donors, so is not a new funding mechanism. Some of the pledged funds have already been allocated… A large portion has been committed to UNFPA, through a variety of funding mechanisms including UNFPA country offices, core funding, and UNFPA reproductive health supplies. UNFPA has been drastically affected by… the Trump Administration’s decision to discontinue all funding to UNFPA.

“Furthermore, a significant section of the SheDecides pledges was promised to international NGOs. Based on evidence of the detrimental effects of the Gag Rule, a number of international NGOs, including IPPF, announced they will not sign the policy. This means that, without alternative funding, there will be serious cuts to sexual health services around the globe. Other funding was promised to multilaterals such as UN Women, UNAIDS, WHO and UNESCO, or allocated through donors’ bilateral programmes.”