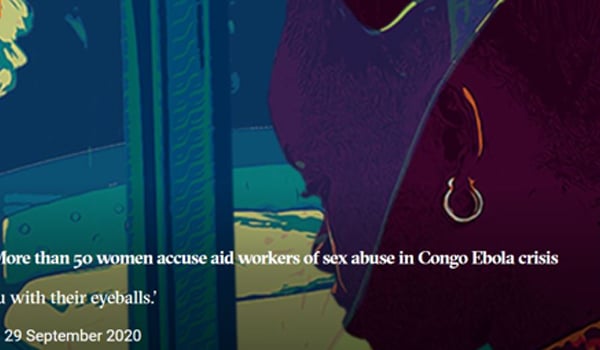 In interviews with the journalists who broke this story, 51 women – many of whose accounts were backed up by aid agency drivers and local NGO workers – recounted multiple incidents of abuse during the 2018 to 2020 Ebola crisis, mainly by men who said they were international workers.

The majority of the women said numerous men had either propositioned them, forced them to have sex in exchange for a job, and terminated their contracts if they refused. Here isone woman’s description of what happened.

Power, poverty, and aid are described as the mix that fuelled the accusations. The investigation, conducted over almost a year, found women who described at least 30 separate instances of exploitation by men who said they were from the World Health Organization, which deployed more than 1,500 people to the government-led operation to control the outbreak. The next highest number of claims were against men who said they were with Congo’s Ministry of Health, noted by eight women.

Despite “zero tolerance” policies and pledges by the UN and NGOs to crack down on such abuses, as exposed inHaitiandCentral African Republic, reports of such behaviour continue to surface.

Although the women did not know all of the men’s nationalities, they said some came from Belgium, Burkina Faso, Canada, Côte d’Ivoire, France, and Guinea.

“Why would you even ask if I reported it?”asked one woman. Another woman said the practice of men demanding sex had become so common that it was the only way of finding a job in the response. Still another called it a “passport to employment”.

In discussions with hundreds of community members in multiple towns, sexual exploitation was a “consistent finding”, according to a consultant commissioned by CARE International to research gender issues during the Ebola crisis. “Whether we talked to adolescent girls, or adult women, or women in the community or in the government, everybody said the same thing.”

Only three of the organisations accused in Congo pledged investigations into the accusations, based on the reporters’ findings. Most of the others said they had received no abuse reports during the crisis. After being made aware of the allegations, UN Secretary-General António Guterres called for them to be “investigated fully”.