Médecins du Monde, 28 September 2016In Haiti, one woman in seven has an abortion in the course of her lifetime. Yet abortion remains illegal in this country, where access to contraception is also very limited. To put an end to an unwanted pregnancy, clandestine abortion is the only remedy. A dangerous practice, the third largest cause of mortality among Haitian women, against which Médecins du Monde is fighting as an activist, alongside civil society organisations, for respect of sexual and reproductive rights.Taking unknown tablets without a medical prescription, using traditional remedies or worse, or inserting into the uterus something as damaging a coat hanger, abortion is often practised in disastrous conditions. The complications for women are numerous. They range from haemorrhage to infections and infertility. For Dr Joseph Alexis Villaime, head of Gynaecology at the Hospital OFATMA in Port-au-Prince, these complications could very easily be avoided. “It takes only that we should stop being hypocritical today. Between official speeches that condemn what should be a medical service and informal practices, every day I see the women who suffer from complications following unsafe abortions. The vast majority of my patients have had no other choice. However, for me, as doctor, it is essential today to support each woman in her decision whether to have a child or not”. 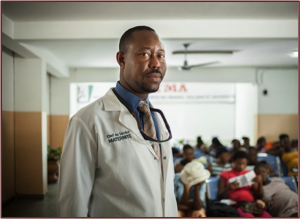 Le docteur Villaime, chef du service gynécologie de l’hôpital OFATMAà Port-au-Prince © Livia SaavedraOther groups, who have been long-standing partners of Médecins du Monde, have been fighting for years to reform the law on abortion. The group Solidarity Haitian Women (SOFA, in Creole: Solidarité Fanm Ayisyèn), a feminist association, pleads for better inclusion of women in Haitian society and denounces the many forms of violence of which they are victims. Its President, Lise-Marie Dejean, doctor and first woman Minister on the Status of Women, continues 30 years after the creation of the association, to advocate for the cause of women…FULL ARTICLE + VISUALS (en français)