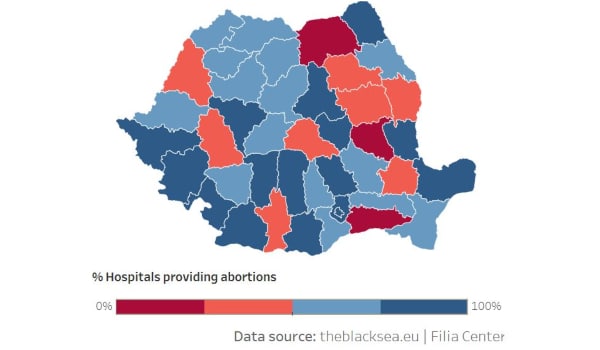 An article in the publication The Black Sea opens with the story of a young woman who sought an abortion at one the largest regional public hospitals with a gynaecology department. “I asked if they could do a medical abortion there. The doctor said they could not “perform abortions”, that the entire hospital refuses to carry out terminations, or provide medical abortion pills. The doctor recommended a private clinic. The young woman persisted in asking about the pills, which are permitted until the ninth week of pregnancy in Romania. “I asked the doctor how to take the pills and she told me, “You are a student of medicine, you will work it out. I feel bad, but this is the situation.”

The young woman asked a friend to help her obtain the pills and she used them without medical support.

The manager of the hospital was reported to say: “The law does not oblige us to do this, as it is a service on request, and we can accept or not,” he said.The law in Romania allows abortion on request up to 14 weeks of pregnancy. But a significant number of hospitals are refusing. An investigation by The Black Sea between March and July 2019 found that 60 of 190 publicly owned hospitals in Romania with gynaecology departments, almost 30%, refuse to provide abortion services.

Human rights lawyers said it was illegal for an institution to practise conscientious objection, only individuals can do so. Nonetheless, this was what was happening. Interviews conducted by The Black Sea, as well as examination of financial records, suggest that an influx of support and tactics from abroad over recent years has played a role in intensifying opposition to abortion throughout Romania.

Human rights lawyer Iustina Ionescu said that any woman refused an abortion by her local hospital could sue, drawing a distinction between individual doctors and the healthcare provided by a public hospital, covered by the healthcare law. The professional code states that any doctor refusing to provide abortions must first give their reasons and then direct the patient to another colleague or medical unit. But many hospitals appear in breach of this requirement. Of the hospitals that the authors called by phone, ten failed to make any referral at all, and a further 16 gave no specific referral, instead suggesting that our reporter go to another city or a private clinic. “The referral process is not working,” said Florin Buhuceanu, president of human rights NGO Accept, and executive president of Euroregional Center for Public Initiatives (ECPI),who did research on abortion access in early 2019 with the NGO Centrul Filia.

One doctor said she stopped carrying out abortions seven years ago because of “a general fatigue at having done so many”, a reason also cited by other senior doctors. “In the 1990s, when abortion was legalised in Romania, there were very many,” she said. “We had around 50 a day. On this corridor [of our hospital], all the rooms were for curettage. And then everyone was doing it, of course, and I did it. There were very many; now there are very few. I believe that we have four to five per day.”

The article goes on to describe Romania between 1966 and 1989, under Ceaucescu, when abortion was illegal and an estimated 10,000 women died from dangerous abortions. After his death, abortion was legalised, and the deaths stopped happening. This history apparently needs to be relearned, preferably through education, not more women’s deaths.
SOURCE: The Black Sea, by Lina Vdovii, Michael Bird, 11 July 2019. Sent by Daniela Draghici, Romania