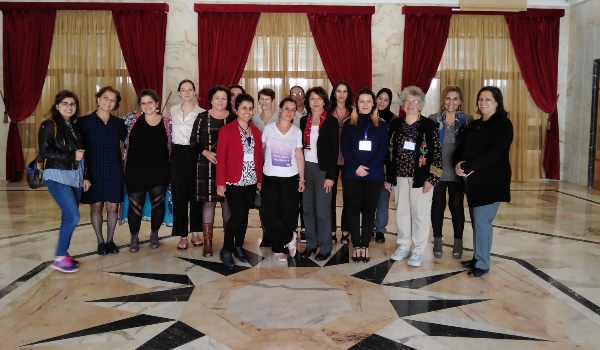 A Meeting to Launch the RAWSA MENA Regional Network

On the 15-16 April 2019, the Groupe TawhidaBen Cheikh, Tunisia, with funding from the International Campaign for Women’sRight to Safe Abortion and the Safe Abortion Action Fund, brought together 17 NGOrepresentatives from eight countries in the Middle East and North Africa (MENA)region to discuss regional advocacy strategy on safe abortion and capacitybuilding.

Opening the meeting, the keynote speaker,Professor Hafidha Chekir, Vice-Presidentof International Federation of Human Rights (FIDH), calledfor the mobilization of the community around the right to abortion, in order toachieve safe, legal abortion in the MENA countries. This meeting, she said, willstart the discussion and from the first, it should try to build a network thatwill not only advocate for safe, legal abortion in the region but also call forStates to ensure the law is changed and implemented in women’s favour and forhealthcare systems to ensure access to safe abortion for every woman in theregion who needs it. The regionalnetwork can work to create an enabling environment that will help to make all thispossible.

The 15 participants from the MENA region camefrom: Algeria, Egypt, Iraq, Lebanon, Morocco, Oman, Palestine, and Tunisia. Inaddition, two representatives of the International Campaign from London attended.Apologies with expressions of interest in participating in the future werereceived from invitees from Egypt and Sudan.

The meeting was held in English when inplenary and in French and Arabic when it broke into two groups for workshops.

The agenda over the two days was as follows:

Expectations of the participants

Although the specific situation of eachcountry in the region varies, participants expressed similar expectations: theopportunity to benefit from shared strategic information from neighbouringcountries; the conduct of joint advocacy activities, including campaigns; andto keep updated on major international and regional events relevant to the cause.

Building capacity was also mentioned as a desired objective for the region, as not all the countries were at the same level with regard to civil society capacity to launch, develop and manage argument and dialogue with women and the public on abortion. Participants therefore had high expectations for the establishment of a regional platform, which would support their advocacy efforts at the country level.

Collectively, the members of the regional network could ensure that the issue of the right to safe abortion becomes a subject of country debate and is placed on the public agenda. Another expectation was the development of a common language and terminology (even a glossary) to use at the country level. Interaction with the media, politicians and law makers were also considered a priority.

Existing laws are mostly based on the colonialNapoleonic Criminal Code, incorporated into national laws at independence inthe early 1960s and never revised thereafter. Today, 80% of women ofchildbearing age in the MENA region live in countries with restrictive abortionlaws. In 55% of the countries, abortion is not permitted for any reason exceptrisk to the woman’s life, and in 28% of the countries abortion is also legal topreserve the woman’s physical and/or mental health, but this is not interpretedliberally. Abortion is permitted in only twocountries (Tunisia and Turkey) without legal restriction in thefirst 12 weeks. However, in Tunisia today, and even more so in Turkey, it hasbecome harder to find a safe abortion provider.

Discussion of law reform has taken place in the past several years in Morocco and a group of parliamentarians in Algeria have tried to introduce some limited grounds for legal abortion, but no country in the MENA region has so far modified its restrictive law. Although health professionals, pharmacists and anyone who helps a woman to have an abortion can be prosecuted, prosecutions and imprisonment are rare. Because abortion is a necessity for women, the laws are not respected, and abortion is usually accessible and safe for women who can afford the high costs of (mainly private) medical provision. Unsafe abortion almost exclusively affects poor, young and marginalised women. In addition, taboos and the negative attitudes of providers, politicians and society in general, including the media, create other important barriers to accessing safe services. Finally, in some countries, any form of advocacy and campaigning may be limited because the laws prohibit it.

A more detailed report on abortion law and policy in the region will be prepared and circulated, based on presentations of participants at the meeting.

Following a discussion of which NGO at the meeting was willing and able to host the network, it was agreed that Groupe Tawhida Ben Cheikh (GTBC), would host the network. They have the advantage of being in Tunisia, where abortion is permitted, and also the infrastructure and experience of organizing international meetings as well as giving trainings on safe abortion provision.

Vision Every woman in the region who seeks an abortion has the right to a safe, legal, accessible, free abortion at the point of care. Unsafe abortions should become history. There should be universal access to safe, legal abortion for every woman who requests it without discrimination or stigma. Access must be ensured through a fully functioning and resourced health care system with well-trained health care providers. All barriers – whether cultural or financial – should be removed.

Aim To support members’ activities and advocacy for the right to safe abortion in their countries and across the MENA region.

Membership Members can include national and local NGOs and organizations, women’s groups and collectives (formal and informal), and individuals. Members must be willing to commit themselves to the vision, aims, objectives and values of the Network and to take action in support of the right to safe abortion. They must be determined to remain independent from any pressure group (whether religious, political or other). Anyone wishing to join the Network must be proposed by an existing member and confirm that they agree with the terms of the Network’s Charter.

Activities in the coming 1-2 years

Advocacy and other activities

Close of the meeting Certificates of attendance were given out and the Groupe Tawhida Ben Cheikh gave thanks to the participants. They recognized the tremendous work that had been done and the consensus that had been built over the two days, and said how rewarding it was for them to host the meeting and to see its results. The participants all agreed!!

This report will be translated into French and Arabic.