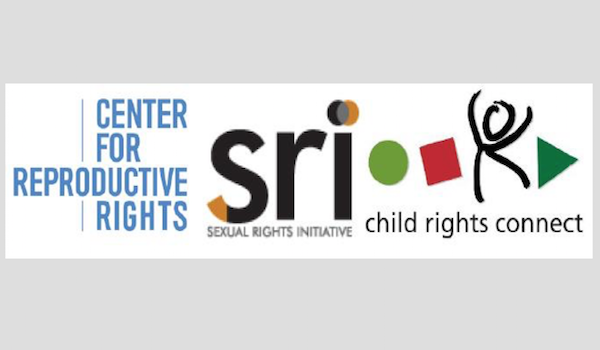 On 24 March 2017, the Human Rights Council (HRC) adopted its annual resolution on the rights of the child. In response, the Center for Reproductive Rights, Sexual Rights Initiative and Child Rights Connect published a joint statement in response, which criticises the HRC statement for not representing the most advanced human rights standards pertaining to the protection of the rights of the child, and for falling below the agreement reached in the 2030 Sustainable Development Goals. This is their statement:

…In particular, the resolution fails to incorporate the right to be heard, the right to participate, adolescents’ rights to sexual and reproductive health, and the principle of evolving capacities. Moreover, the resolution neglects the particular needs of children with disabilities and LGBTI children and does not recognize that family environments are often sites of violence, especially for girls.

As the highest political body dedicated to the promotion of human rights, the Council has a duty to move beyond the status quo, to champion the core principle of universality of human rights for all and to move forward in the development of norms and standards. The Council must demonstrate the political will and leadership necessary to address the protection of the rights of all children everywhere, bearing in mind that they are active agents in their own lives and rights holders under international human rights law.

– Recognizes the central importance of international human rights law to the 2030 Agenda for Sustainable Development;

– Expresses concern that, inter alia, 1 million girls under 15 give birth ever year, that the risk of maternal mortality is highest for adolescent girls under 15 years of age, that more than 200 million girls and women alive today have undergone female genital mutilation and that 3 million girls are at risk of undergoing female genital mutilation every year, and that more than 720 million women alive today were married before their 18th birthday and that more than one in three (about 250 million) entered into union before age 15, and that, child, early and forced marriage disproportionately affects girls;

– Recognizes that children are disproportionately affected in complex humanitarian emergencies, increasing their vulnerability as refugees, internally displaced persons or migrants;

– Acknowledges that the 2030 Agenda pledge to leave no one behind involves addressing multiple forms of inequality and discrimination, and provides an opportunity to tackle inequities faced by children especially those who are marginalized or in vulnerable situations, who face stigmatization, discrimination, violence or exclusion, which requires a multidimensional approach to realizing children’s rights and full potential and empowering them as agents of change;

– Encourages States to promote a child’s rights-based approach in the implementation of the 2030 Agenda for Sustainable Development;

– Requests the United Nations High Commissioner for Human Rights to contribute to the work of the High Level Political Forum on the follow-up of the 2030 Agenda for Sustainable Development, in consultation with relevant stakeholders by providing inputs from a child’s rights perspective, to the yearly thematic reviews of progress at the Forum, focusing on achievements and challenges, taking into account implementation on recommendations of previous Human Rights Council Resolutions on the Rights of the Child

The resolution reaffirms that ‘the child should grow up in a family environment […] and that families’ and caregivers’ capacities to provide the child with care and a safe environment should be promoted’. The resolution however does not acknowledge the fact that for many children, especially girls, family environments are places of violence. According to UNICEF, ‘on average, about 6 in 10 children worldwide (almost 1 billion) between the ages of 2 and 14 are subjected to physical (corporal) punishment by their caregivers on a regular basis. According to the same report, with regards to girls ‘Among girls aged 15 to 19 worldwide, almost one quarter (around 70 million) said they were the victims of some form of physical violence since age 15. Never-married girls are most likely to report physical violence at the hands of family members, friends or acquaintances and teachers’. The resolution should therefore have included a paragraph that reflected this reality as it severely hinders the realization of children’s rights and of goal 5 of the 2030 agenda.

Furthermore, the resolution fails to address the issue of the protection of the rights of the child under the prism of evolving capacities, thus failing to recognize that children, including adolescents, acquire enhanced competencies in the exercise of their own rights, requiring less direction and gaining greater capacity to take responsibility for decisions affecting their lives. In its General Comment 20 on adolescents, the Committee on the Rights of the Child  reiterates that the implementation of the rights enshrined in the convention should take account of children’s development and their evolving capacities and that approaches adopted to ensure the realization of the rights of adolescents differ significantly from those adopted for younger children. This is crucial for the implementation of the relevant goals and targets in the 2030 agenda and should have been included in the resolution.

The resolution does not mention that gender equality and the empowerment of women and girls cannot be achieved without respecting, protecting and fulfilling girls’ sexual and reproductive health and rights to ensure the full realization of the 2030 agenda. This is especially problematic given the two panels held during this session on the Rights of the Child and Maternal Mortality and Human Rights, respectively, in which States, UN agencies and civil society stressed the strategic urgency to fulfill adolescents’ sexual and reproductive rights.

The resolution does not highlight the fact that girls, especially marginalized girls including  girls with disabilities, are also often denied their right to decide freely on matters concerning their body and sexual and reproductive health, does not reiterate their right to access comprehensive sexual and reproductive health information and services free for discrimination, coercion and violence as agreed upon in Goal 5 and numerous international agreements and fails to oblige States to guarantee the provision of evidence-based comprehensive sexuality education for children and adolescents.

Even though the resolution aims to ‘leave no one behind’, it does not recognize the importance of youth and children and youth and children-led organizations as crucial partners in the implementation of the 2030 agenda. Furthermore, LGBTI children and adolescents are excluded in the list of marginalized children. Children with disabilities are only mentioned once and the resolution does not mention the 93 million children with disabilities in the world likely to be among the poorest and most marginalized members of the population and doesn’t address their specific concerns.

If the core group of 61 states are to address these challenges in the next rights of the child resolution, increased priority for these issues must be forthcoming from capitals. Leaving no-one behind requires states to ensure that these key areas are included in future resolutions so that actions taken in Geneva are relevant for implementation on the ground and are meaningful to the lives of the children affected.