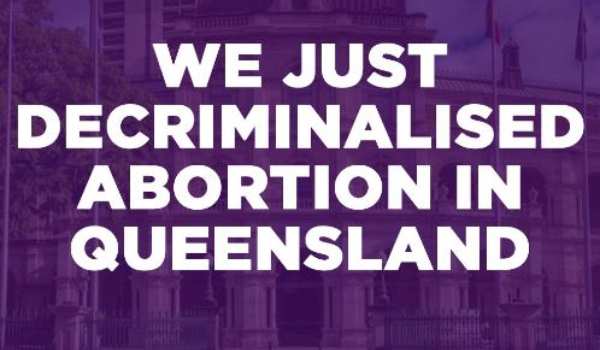 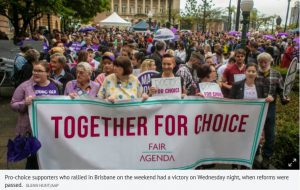 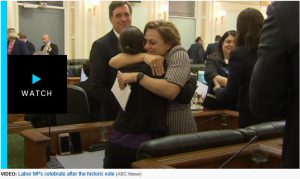 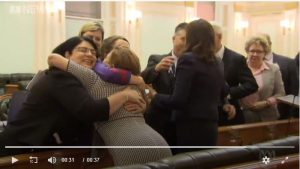 On 17 October 2018, at 7.42pm, after a 50-year struggle by women’s groups, the Queensland Parliament voted 50 to 41, via a conscience vote, to remove abortion from the 119-year-old criminal code. During an often passionate and emotional debate over two days, 69 out of 93 members spoke. The new law makes abortion legal on request up to 22 weeks of pregnancy, and thereafter with the approval of two doctors. It also introduces safe access zones of 150 metres around clinics to shield women from harassment, and requires conscientious objectors to refer women to a medical practitioner who will provide a termination. There were loud cheers and applause from the packed public gallery in the legislative assembly chamber, and people were both happy and almost in tears, see video. Interviewed afterwards, Deputy Premier Jackie Trad was asked to respond to claims that the bill facilitated “late-term abortions”. She said the suggestion that women somehow woke up at 37 weeks’ gestation and decided they no longer wanted to be pregnant was offensive. “Those who are putting forward that argument need only look at the statistics from Victoria and even from Queensland – 99% per cent of abortions are before 20 weeks and most of them before 12. Those after 20 weeks involve very complicated medical conditions.” Children by Choice, who have been in the forefront of the campaign since 1972, were thrilled and gathered supporters together from that date on for photos. New South Wales is now the only Australian state where abortion remains a criminal offence.