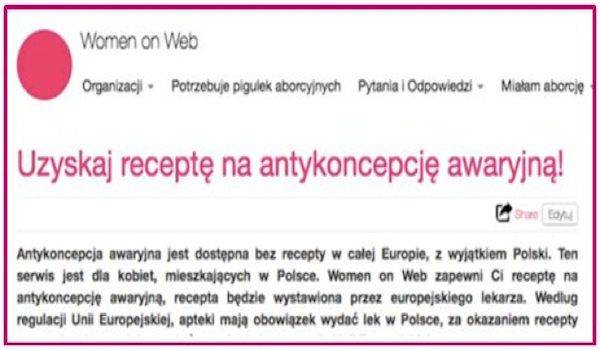 Emergency contraception (EC) is available over the counter in most European countries following a January 2015 ruling by the European Commission, upon the recommendation of the European Medicines Agency. This authorised that EC with ulipristal acetate, registered in Poland as ellaOne, could be sold without prescription across the European Union. ellaOne became available in Polish pharmacies without prescription from April 2015, helping to raise the standard of reproductive health services and supplies for Polish women and girls, and expanding post-coital contraceptive choices for women.

The requirement of a prescription still exists in Hungary, Albania and the Russian Federation too.

Mr Konstanty Radziwił, Polish Minister of Health, announced that as a doctor, he would never prescribe emergency contraception to a woman who had been raped. One of the arguments given for reinstating a mandatory doctor’s prescription was the claim (evidence not provided) of misuse of EC pills by teenage girls in Poland and the detrimental effects on their health.

Only women who can afford to see a private doctor will be able to access EC pills now, because getting an appointment with a gynaecologist at a public facility in Poland has an average waiting time of up to 18 days, too late to be able to use ellaOne, which is effective for up to 5 days after unprotected sex.

Thus, a government that claims to be anti-abortion will contribute to a rise in the number of unplanned pregnancies and abortions in a country where access to safe, legal abortion is already incredibly difficult.

Free electronic prescriptions for EC for women in Poland

On 26 May, Women on Web announced that they will provide all women with free prescriptions to EC from a European doctor from now on. This will allow women to go to a Polish pharmacy for EC pills. Women who need a prescription can fill in an online consultation for morning after pill.

They report that the UN Committee in Economic, Social and Cultural Rights states that: “Unavailability of goods and services due to ideologically based policies or practices, such as the refusal to provide services based on conscience, must not be a barrier to accessing services.”