Home » News » POLAND – The government party was too cowardly to reopen the debate themselves; so the judges they appointed did it for them 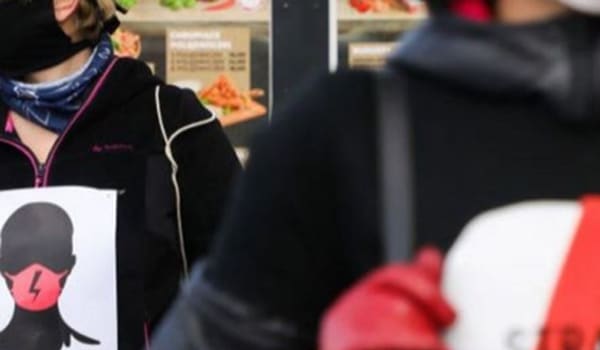 Top photo: protestors wore black to protest, as they did in 2016

There were just over 1,000 legal pregnancy terminations in Poland last year, while between 80,000 and 120,000 Polish women a year had an abortion abroad.

The Polish government party, Law & Justice, had failed to restrict abortion further in the parliament in the past four years, despite holding a majority of seats, so they sent a case to the Constitutional Tribunal (most of whose judges were appointed by the Law & Justice party) asking them to rule that abortion on the ground of severe fetal anomaly was “unconstitutional”.

Ahead of the ruling, Polish activist Antonina Lewandowska from ASTRA Central & Eastern European Network for SRHR told the BBC that the defence of the 1993 law, which made most abortions legal, based on UN rules outlawing torture: “It’s inhuman, it’s despicable honestly to make anyone carry a pregnancy to term, especially if the fetus is malformed. Until todays’ ruling, 98% of legal abortions in Poland were due to fetal malformations.” Except for rape and risk to the woman’s life, all other abortions are now illegal. Today’s ruling took place in the context of repeated government attacks on women’s rights, as well as legal and policy changes that have undermined both the independence of the judiciary and the rule of law in Poland.

Three days before the ruling, Reuters published this story from Warsaw: “In April, in the midst of a nationwide coronavirus lockdown in Poland, Katarzyna found out that the baby she was carrying had a severe genetic disorder and would probably die before birth or shortly after. She immediately decided to terminate the pregnancy. When she finally managed to, five weeks later and after meeting some ten doctors, securing a fallback plan in Germany and researching home methods, she knew she would not try to get pregnant again.”