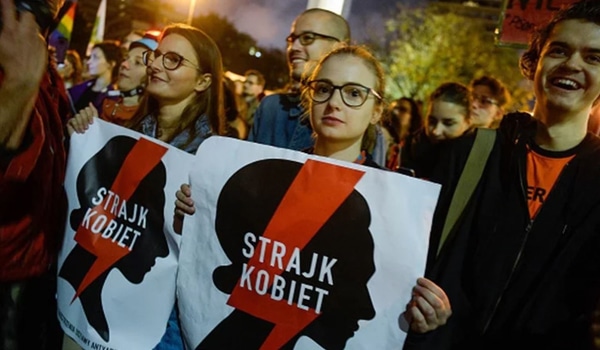 The Polish parliament was to discuss a so-called”Stop Paedophilia” bill (which is not about paedophilia at all) on 16October 2019. The bill, supported by the governing conservative Law and Justice (PiS) party, aims tocriminalise sex educators, who are threatened with three or even five years inprison for teaching about sexual and reproductive health, human sexuality,healthy relationships, intimate life and prevention of violence. The authorsand publishers of books or magazines for teenagers in which contraception andsex are discussed are also threatened.

Some 1,000 people demonstrated in Warsawthat evening against the bill, led by young people.

IPPF Europe writes: “This is an utterly irresponsibleproposal in a digital era where it is not possible to control what informationyoung people see and how they interpret it. Children as young as nine aregetting their first information on sex from internet pornography. Violenceagainst women and girls is endemic all over the world; in Poland 4.5 millionwomen experience psychological violence at the hands of their current partnersor husbands; and 2 million women experience physical or sexual violence. Parentseverywhere want to protect their children as they grow into adulthood andensure they have happy and healthy lives. In this, they urgently need to besupported by the wider community, including schools. Various studiesdemonstrate that education addressing equality between men and women andfocusing on consent can reduce intimate partner violence. The intention of thebill closely mirrors a Russian law from 2012 that has forbidden all informationon sexuality education, making it impossible for teachers to help reduce teenagepregnancies and rates of HIV. This would be a tragic example for Poland tofollow.”

“The ideologically driven progenitors of thispunitive bill clearly don’t care at all about the real challenges that parents,children and society face. The times we live in are full of new dangers, andgovernments should be protecting and supporting young people to develop theskills needed for healthy intimacy throughout their lives, helping to stop anepidemic of violence directed at women. It sends a shiver down my spine thatthere are people trying instead to drive girls and boys back into a world ofignorance and fear. It is also revealing that aninitiative ostensibly intended to prevent paedophilia does not propose anymeasure that would tackle violence such as that perpetrated by the CatholicChurch in Poland’s biggest child sexual abuse scandal.”