Home » News » POLAND – Polish abortion rights advocates reported to the police, but no charges were brought (yet) 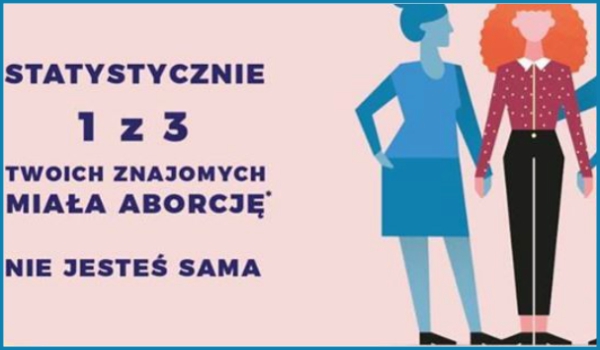 Some time ago we, the Abortion Dream Team (an informal group working on destigmatisation of abortion) and Kobiety w Sieci (community of women with abortion experience who run the online forum and support each other), found out that two anti-choice organizations had filed reports with the police accusing us of committing two kinds of crimes and asking them to press charges against us for our activities.

One supposed crime they accused us of was the Abortion Dream Team’s post on Facebook, which gives information on how to prepare oneself for a home abortion. We have not yet heard from the law enforcement authorities about that, but we do expect something to happen.

The second one was about the online forum and “illegal helping” of women to have an abortion that is punishable under Polish law. As a result of that, one of us, Justyna Wydrzynska, who is the online forum’s administrator, was called in for an interview on 7 June. At the end of the interview, no charges were brought against her, and we are under the impression that none will be. But it is probably not the end, as there can be more attempts.

We know that this is a backlash. The forum has been operating for 12 years. For a long time, it was done quietly. Thousands of women got support they needed. Recently, it became more visible. Women with abortion experience who also support others started talking about it openly and proudly. The anti-choice people could not stand it.

We won’t ever agree that giving information and advice on abortion access – how and where to order pills, how to take them, what to do to make abortion more comfortable and safe – and having support during this experience is a crime of “illegally helping” someone to have an abortion. We will never agree to such an interpretation. And we won’t stop doing what we do even if they call us criminals and press charges against us. We are doing good for women, and we will be there for each other always.

We receive a lot of support and solidarity from our allies in Poland. Today one friend initiated a Facebook action where people write: “I also give information about abortion. You won’t hear about all of us. You can’t lock all of us up. Today, we have all had the experience of abortion; today, we all are abortion supporters”. We are using the hashtag #jatezmowieoaborcji in Polish. In English it is: #IAlsoInformAboutAbortion.

If you would like to do the same, to declare that you are also people who tell others about abortion possibilities, that you also help others to go through abortion in safety and comfort, you can also use this hashtag. You can report what we have written here and also whatever you want. It would be great if you could use one of the hashtags: #jatezmowieoaborcji in Polish; #IAlsoInformAboutAbortion in English.

We would truly appreciate it. Solidarity is our greatest strength.