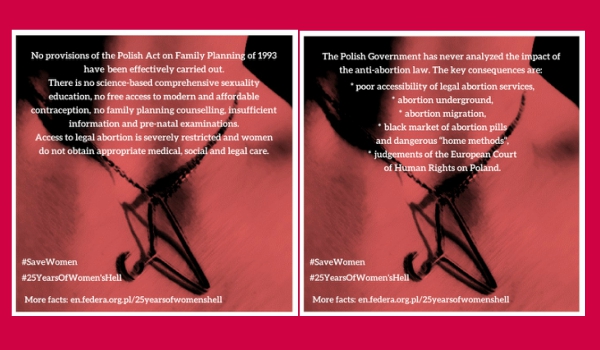 The disastrous effects of the first Polish anti-abortion law, dating from 1993, are the more so important in the light of the parliamentary debates on 10 January 2018 on two civic bills, the “Save women” bill on women’s rights and conscious parenthood and the “Stop abortion” bill (banning abortion in cases of fetal impairment. The latter, in practice means almost a complete ban on the remaining few legal abortions, as 95% of legal abortions are due to this reason.

The first reading of the anti-abortion bill was unexpected and was only announced on 9 January (the Federation for Women and Family Planning had presumed it would be debated in February).

Eighty pro-choice organizations have supported and signed the Federation’s statement concerning the “Save women” bill – which is an appeal to the members of the parliament to have a fact-based, open-minded and genuine debate as well as vote in favour of the bill.

“January 10th will be remembered as yet another day when Polish women were betrayed by people who were given a mandate to represent their citizens and their citizens’ legislative initiative. But Polish members of parliament rejected the “Save women” bill and referred the “Stop abortion” bill to a parliamentary committee, the first stage of being considered.

“Disillusionment grew with every minute. MPs from a conservative wing were not prepared, they had not read the “Save women” bill with comprehension. They were not open to cited facts, real-life stories, statistical data. They spoke like Catholic priests (e.g. quoting Mother Theresa) and repeated anti-abortion lies… No one, including Deputy Minister of Health, spoke a word about women’s health, well-being, autonomy or dignity. They have explicitly supported the “Stop abortion” bill which forces women to continue pregnancy in cases of fetal impairment, namely to treat women like incubators. To force them to look at the pain, suffering of their children and – in many cases – agony.

“We can now be sure that we do not need Kaczyński (former president of Poland) to destroy democracy and human rights. Useless opposition does it.

“We thought we had hit rock bottom already, but then the anti-choice majority knocked us down from below.”

Here you can read more about detrimental effects of the Family Planning Act of 1993 (as part of the Federation’s information campaign called #25YearsofWomen’sHell.

Report from Federation for Women and Family Planning, 10 January 2018.