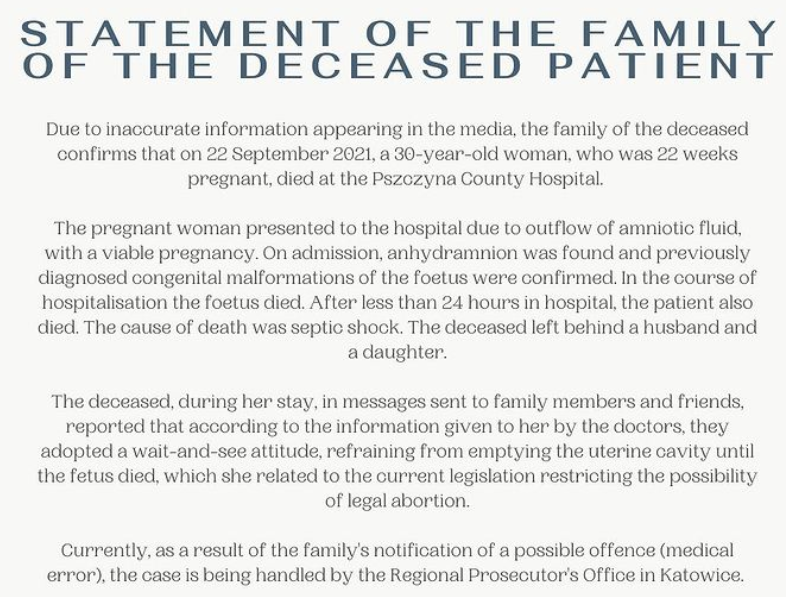 On 29 October 2021, Polish attorney Jolanta Budzowska announced the death on 22 September of 30-year-old Izabela, who was 22 weeks pregnant, married with one daughter, and who had been taken to hospital due to the loss of amniotic fluid from her uterus. According to information provided by the attorney, the doctors were either told to wait for the fetus to die or were afraid to do anything for the woman until the fetus had died. As a result of this delay in action, Izabela died of septic shock.

On 1 November, candles were lit across Poland as part of the campaign called “Ani Jednej Więcej” (Not one more), initiated by Federa and Women’s Strike in solidarity with Izabela’s family. November 1st is All Saints Day in Poland – a day traditionally devoted to visiting the graves of loved ones and silently contemplating life and death. The atmosphere of the day was almost palpable during the gatherings.

Antonina Lewandowska, of Federa & the ASTRA Network, wrote: “I was in Warsaw, outside the Constitutional Tribunal. At 7pm people started pouring in from all directions – marching silently, some with tears in their eyes, other staring blankly ahead. Almost all were holding candles, which were later put behind the railing separating the public from the Tribunal. A few were also holding homemade signs, expressing anger at the medical professionals and/or calling the government and politicised judges of the Tribunal murderers. On the strip of pavement between the two railings, police officers stood, as silent as the gathering crowd. They looked at people putting their candles behind the railing, among the falling leaves from the trees. I was sure the police would be picking up the candles and throwing them away, claiming a fire hazard. To my surprise, the opposite happened. Officers were kneeling down behind the railing, brushing the leaves away and making safe spaces for more candles, moving some away from the railing and making sure nobody got burned. The air was filled with indescribable sadness, silent fury and frustration.” She concludes: “Izabela’s family has released a statement, asking us not to use her death politically. We will honour their request and carry her memory silently with us while going back to our work, only more angry and more determined. So that no woman suffers Izabela’s fate ever again.”

“Instead of protecting the life of the woman, the doctors were thinking only of saving the fetus. This is the chilling effect of the Constitutional Tribunal’s decision [to ban abortion for fetal anomaly] in action.” said Kamila Ferenc, the lawyer at the Federation for Women and Family Planning.

Low amniotic fluid during pregnancy is a serious condition and can be life-threatening if not treated. In this case, the fetus had already been diagnosed with a serious anomaly, which may have been why Izabela’s amniotic fluid was low. It also sounds as if she lost whatever amniotic fluid there was in her uterus and was miscarrying. If that is the case, then her cervix must have been open, which would have put her at high risk for uterine sepsis. All of these are indications for emergency obstetric care – to prevent exactly what happened in the absence of treatment – septic shock followed very quickly by death.

The Pszczyna County Hospital where Izabela died announced that all medical decisions regarding the 30-year-old pregnant woman were made taking into account the legal provisions in force in Poland regarding the admissibility of termination of pregnancy and the standards of conduct. Their website also published the following statement: “We join in pain with all those who have been touched by the death of our patient, especially with her relatives. Pregnancy, childbirth and the puerperium have been perceived by medics as one of the most difficult moments for centuries in a woman’s life. Advances in medicine have significantly reduced these risks, but unfortunately it has not yet ruled them out… The only premise guiding the medical procedure was concern for the health and life of the patient and the fetus. Doctors and midwives did everything in their power, they fought a difficult fight for the patient and her child. We do hope that a fair and honest prosecution will allow us to identify the causes of death of the patient and her child.”

The claim that nothing more could have been done is risible. The question of whether “an abortion” would have been legal or not should be considered moot in this case. The pregnancy was no longer viable – with an open cervix and no amniotic fluid it could not have continued. Urgent removal of the fetus along with emergency treatment against septic shock was clinically indicated. This is “standard” emergency obstetric care.

Blaming the criminalised abortion law as a reason for inaction only obfuscates what did happen, as it has with similar cases in the past. What happened to Izabela sounds very like what happened to Savita Halappanavar in Ireland in 2012. Savita was also miscarrying, at 17 weeks of pregnancy. In her case, although the pregnancy was no longer viable, the doctors decided to wait for the fetal heartbeat to stop before doing anything to treat her. Savita also died of septic shock as a consequence of the decision to delay. One of the first comments by a nurse after her death, to justify their inaction to her husband, was: “This is a Catholic country.” That led me to do research on Catholic Health Policy on abortion; I published the findings in 2013 in Reproductive Health Matters. This policy, understood as having to wait until the fetus is dead to treat the woman – so as not to be guilty of abortion – has been the reason given for non-action in more than one such case  – in Ireland, in the USA and in Latin America.

Izabela’s family is reported to be of the opinion that the doctors delayed terminating the pregnancy for too long, which contributed to her death. Based on what has already been reported, they seem to be right. Atty. Budzowska who is representing them, has for many years dealt with civil matters in the field of patients’ rights and with claims for damages due to personal injury, in particular due to medical negligence. An investigation as to whether what happened was manslaughter was being conducted by the Regional Prosecutor’s Office in Katowice.

Another investigation was also begun by the Polish National Health Fund. One source says the Health Fund took over the investigation from the Prosecutor’s Office. The findings as reported in Gazetaprawna.pl support the supposition that Izabela was miscarrying and that she had signs of infection and inflammation. After the fetus died, she was transferred for surgery but she was dead an hour later. “The obtained autopsy results indicate a high probability of septic shock and infection,” the Prosecutor Wichary was quoted as saying.

In the RHM article about Savita, I said I thought that any hospital or health professional that would deliberately fail to treat the woman until the fetus was dead, knowing full well the short window of time available to save the woman’s life by evacuating the uterus, should not be permitted to provide emergency obstetric care – because in cases like this, which are not so uncommon, they would be responsible for letting the woman die.

SOURCES: Legal500.com ; Mayo Clinic on loss of amniotic fluid ; Gazetaprawna.pl, 2 November 2021 ; Impressions from the protest outside the Constitutional Tribunal on 1 November in Warsaw, by Antonina Lewandowska, Federa & ASTRA Network, 2 November 2021 ; Death toll of anti-abortion law in Poland, by Federation for Women and Family Planning, 2 November 2021 ; Termination of pregnancy as emergency obstetric care: the interpretation of Catholic health policy and the consequences for pregnant women. An analysis of the death of Savita Halappanavar in Ireland and similar cases. Reproductive Health Matters, by Marge Berer, 24 May 2013.