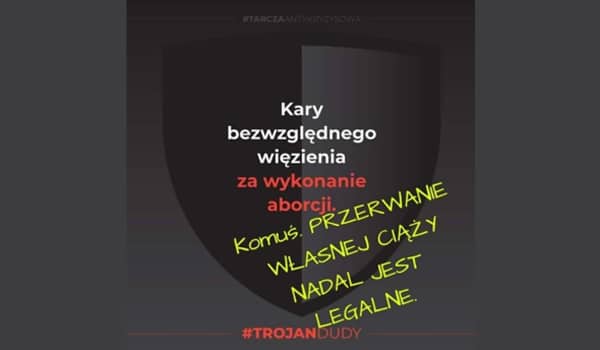 On the 23rd of June, sitting uncomfortably within Shield 4.0, the fourth package of “pandemic-related measures”, which was supposed to help the economy, were changes to the Polish Penal Code, added almost secretly. They include, for example, that up to eight-year prison sentences would be applied to those who provide abortions outside the limits of Poland’s already highly restrictive law. Other changes include penalties for offending the President, new crimes involving theft, and involuntary medical mistakes.

This has happened with the presidential election coming up this weekend in Poland. It is believed that the ruling party is seeking to cement its power and rally its base, thus further eroding the rule of law, human rights protection and democracy.

Under the new clauses, absolute prison sentences, without the possibility of mitigation, will now apply to anyone who has provided an illegal abortion. (Fears have been expressed by women on social media that this includes those who have abortions too, but they should be assured that it does not).

This is the second time the government has sought to impose these restrictions, according to Dr Mikołaj Małecki from the Jagiellonian University. The first time was last year, when they were blocked by President Duda himself. One of the most important outcomes will be that the courts in Poland will lose their flexibility in imposing penalties.In almost all cases, they will have to impose a prison sentence; it will also put further pressure on judges to conform to the ultra-conservative political agenda of the government. Will judges react? In early January 2020, there was a protest by hundreds of judges against threats to their independence for other reasons.

Dr Małecki hopes (or hoped) the parliamentary majority would reject these provisions, which have not yet been voted on.

IPPF-EN reported on 25 June that Polish civil rights groups – led by the Polish Women’s Strike coalition – gathered outside the Presidential Palace in Warsaw to condemn these retrograde laws and ask for the protection of all people from coercion and ill-treatment. A performance and a silent protest respecting social distancing has been organised at 18.00.

In Poland, the legislation on abortion care is already among the most restrictive in Europe. Attempts to restrict rights further have been constant, with ultra-right groups influencing the government’s agenda. In May, the Polish Parliament tried to remove the legal obligation to refer patients to another facility if they refuse to provide abortion care based on their personal beliefs, for example. The new provision opens the way to heavy prosecution and sentencing of doctors and other abortion providers, who have already faced increased prosecution for many years. Women’s community support groups have also become the target of attacks in the last two years.