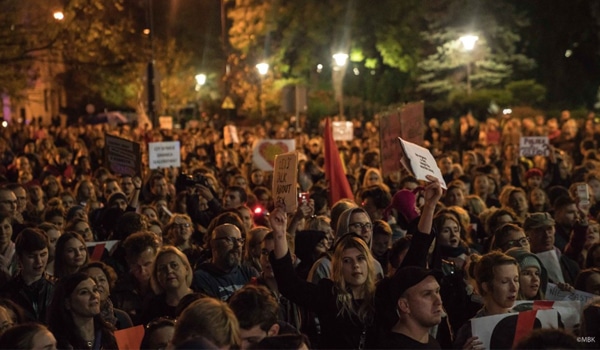 The Ponton Group of Sex Educators in Poland and other mediareport that the ruling PiS partyintroduced a bill in the SEJM (parliament) which had its firstreading on 15 October, arising from the so-called “Stop Paedophilia” project.The bill assumes a change in the provision of Article 200b of the Penal Code(Art. 200b. Whoever publiclypromotes or approves paedophile behaviour shall be subject to a fine, thepenalty of restriction of liberty or the penalty of deprivation of liberty forup to 2 years.) However, the provision is to be extended by threeparagraphs aimed at attacking all those providing sex education in Poland –parents, doctors, educators, teachers – stated explicitly in an explanatorymemorandum of the Act.

The proposed Article 200b(4) says: “Whoever promotes or condones engaging in sexual intercourse or any other sexual activity by a minor, while acting in connection with holding a position, exercising a profession or activity related to education, treatment or care of minors, or acting on the premises of a school or other institution or educational and care facility, shall be subject to the penalty of deprivation of liberty for up to 3 years.” In short, this would ban providing or promoting sexuality education or e.g. information/contraceptive methods by a healthcare provider. Yet Article 4 of the Act of 7 January 1993 on Family Planning, Protection of the Human Fetus and the Conditions for Permissibility of Termination of Pregnancy stipulates that: “school curricula shall include knowledge about human sexual life, the principles of conscious and responsible parenthood, the value of family, life in the prenatal phase and methods and means of conscious procreation.” And the age of consent is 15.

Hundreds of people joining protest rallies outside the Sejm and across the country as on 16 October 2019. The bill was due to go to the Senate on 18 October, had it passed. Instead, it was sent to a commission for further work. As PiS no longer has a majority in the upper house, the bill may be dead.

Many Polish schools do not offer formal sex education, insteadteaching students how to “prepare for family life”. Some cities runby more liberal parties have allowed formal sexuality education programmes inschools, which is partly blamed for having caused this backlash.

PiS have condemnedprevious attempts to broaden sex education in Poland, claiming such effortswould “sexualize” children. The campaign “Stop Sexualization ofYouth” has previously claimed that sex education “promotes sexualactivity among the youth,” according to theWprostreport– a claim that has been shown to be false everywhere research has been done.Supporters of comprehensive sex education argue that appropriate sex educationis a necessary part of the school curriculum, based on World HealthOrganization standards for Europe.