Home » News » POLAND – Abortion Without Borders has helped more than 5,000 people in Poland in their first year & celebrates with billboards

Since they were launched on 11 December 2019, Abortion Without Borders (AWB) has provided pregnancy options counselling, information about safe abortion with pills in Poland, and funding and practical support for abortion outside Poland. To celebrate their first anniversary, the group has engaged billboards in Warsaw advertising their organisation and will hold a press conference in Warsaw at 11 am on 10 December local time.

In their first year, Abortion Without Borders has:

Initially the AWB helpline was hearing from an average of 250 people each month, but after the Constitutional Tribunal ruling on 22 October 2020, widespread protests raised awareness of the group and its services. Calls to the helpline grew exponentially. The group heard from roughly 2,700 people between 22 October and 11 December and roughly 2,500 from 22 October and the first week of December.

To celebrate their first anniversary, AWB has arranged for two billboards to go up in Warsaw advertising their services. The billboards, which provide contact information for the group, are intended to capitalise on the incredible amount of public support shown by the hundreds of thousands of people who took to Polish streets in protest against further restrictions to Poland’s already cruel and restrictive abortion law, as well as to raise further awareness about the help on offer from the charity. 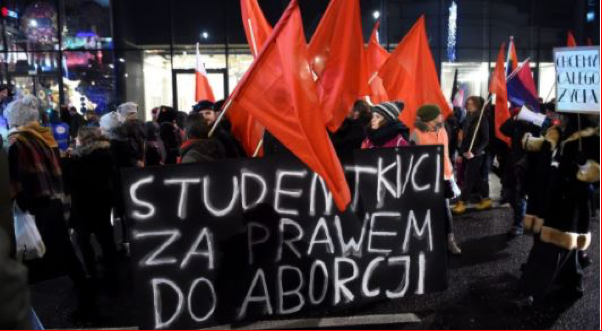 Instead of taking part in remote learning on 9 December, Polish students put up protest badges on their online learning profiles and went onto the streets, protesting against the Law and Justice (PiS) education minister, Przemyslaw Czarnek, whom they accuse of not only holding homophobic and misogynistic views, but also – importantly – of pursuing the governing party’s agenda of politicising the education system. They are calling for the education minister to be dismissed. They have displayed protest messages and badges on social media, while also donating blood, collecting garbage during forest walks or supporting local restaurants. At the peak of the action week, many students across the country (impossible to estimate numbers) abandoned online classes and, in some cases, joined protest actions in their towns. In Warsaw, it was a climate strike march to the prime minister’s office organised by Fridays for Future and supported by the Polish Women’s Strike. Climate and other youth activists are worried about the consequences of a Polish veto of the next EU budget on the planet’s future as well as on their own lives.

Czarnek was appointed in October. He is known for his infamous remarks on “LGBT ideology”, which he claimed “comes from the same roots as Nazism”, while its “supporters are not equal to normal people”. He has also made remarks about the danger of women being told they can have a career first, children later. “Saying to a woman that she does not have to do what she was called on by God to do [has] dire consequences,” he said. Opposition to him is also centred on PiS’s attempt to transform the education system into a propaganda machine for the nationalist-Catholic vision of society that it has been promoting since it came to office in 2015. He has also threatened universities that allowed their students to take part in the women’s protests with unspecified negative consequences.

Alongside the protests, the Polish Women’s Strike has been organising working groups tasked with identifying the major concerns of the anti-government protest movement beyond women’s reproductive rights. Education is high on the agenda. The education movement is supportive of the Women’s Strike but autonomous too. A petition demanding the minister’s dismissal collected over 90,000 signatures and, in late November, it was submitted to the Prime Minister Mateusz Morawiecki, with no reply to date.