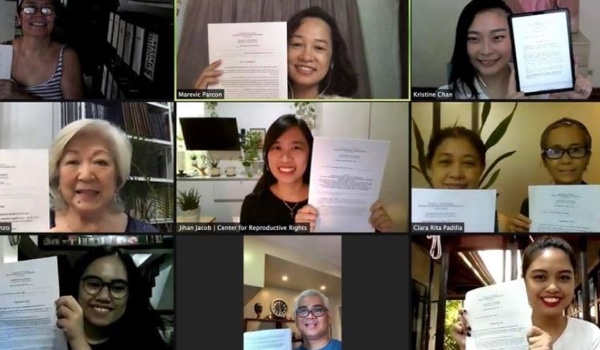 The Philippine Safe Abortion Advocacy Network (PINSAN) has launched their draft bill to decriminalise abortion. Their webinar launch of the bill was attended by 100 people and the livestreamed broadcast on Facebook reached 2,000 views. They also launched a Change.org petition, which they are asking everyone to sign.

The current restrictive abortion law has not stopped women from inducing abortions but has only forced women to seek out unsafe methods to end their pregnancies. These women are at risk of dying when they induce abortion unsafely in the following ways: 1) relying on persons lacking the necessary skills, 2) being in an environment not confirming to minimal medical standards, 3) using tablets without access to proper information or to trained healthcare providers, 4) inserting foreign objects in their vaginas/uteruses.

Around 610,000 Filipino women were estimated to have induced abortions in 2012 – with at least three women dying each day and 100,000 others hospitalised due to complications.This public health issue should be addressed urgently, especially now with the impact of the Covid-19 pandemic resulting in higher rates of unintended and unwanted pregnancies due to lack of access to contraceptives and higher incidences of rape, intimate partner violence, and sexual exploitation.

Filipino women who have abortions are representative of a majority of Filipino women – poor, Roman Catholic, married, with at least three children and at least a high school education. They identify various, overlapping reasons for inducing abortion. Poor women comprise two-thirds of those who induce abortion using riskier abortion methods, thus disproportionately experiencing severe complications, clearly making abortion a social justice issue. Meanwhile, one out of nine women cites rape as their reason for needing an abortion. The harmful stigma women suffer from the restrictive law and the oppressive religious beliefs imposed on women will continue to place women’s lives and health at risk.

The colonial, antiquated 1930 Revised Penal Code on abortion has never reduced the number of women inducing abortion. It has only endangered the lives of hundreds of thousands of Filipino women by forcing them to turn to unsafe or clandestine methods. We believe it is high time the Philippine government decriminalizes abortion, in compliance with its international human rights obligations and women’s right to life, health, equality, equal protection under the law, privacy and bodily autonomy, and against torture and cruel and degrading treatment.