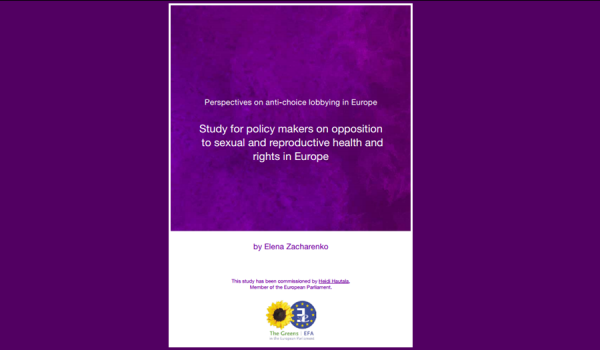 This study is primarily for progressive politicians and policy makers. It aims to provide the tools to help identify conservative actors working to oppose sexual and reproductive health and rights (SRHR) at European level and proposes a positive counter-strategy. The findings of the study will also be useful for media and civil society actors. The research relies on the growing body of academic literature analysing the emergence and motivations of the anti-choice, and more widely, anti-gender movement. However, the purpose of this study is primarily to influence political strategy and policy-making, and is therefore pragmatic rather than academic in nature. It was commissioned by Heidi Hautala, Member of the European Parliament, Finland, and Co-Chair of the European Parliament Working Group on Reproductive Heath, HIV/AIDS and Development.

Following the Introduction by Heidi Hautala, section two of this study presents the historical and political context in which the anti-choice organisations and actors on the international and EU levels have become active, and some of the factors accounting for their ability to mobilise popular support.

Section three presents the main anti-choice actors operating at EU level and lists organisations aiming to influence the policy process in Brussels, be it through lobbying, campaigning or activity at member state or international levels. Section four describes the tactics applied by anti-choice organisations at EU level in order to influence policy and legislative work or to hamper the work of organisations working on sexual and reproductive health and rights. Section five presents a set of recommendations as well as best practice examples of actions for pro-choice policy-makers to allow them to work in a pro-active and strategic manner with the challenge posed by anti-choice actors.

The annexes provide background information on the international legal basis for sexual and reproductive health and rights as well as the EU’s position on SRHR in the global and the EU context. A list of resources for further reading is also provided.

The movements, organisations and individuals described in this study as ‘anti-choice’ are entities with a political and policy agenda, which aims to oppose the implementation of sexual and reproductive health and rights (SRHR). These entities are far from being the grassroots, apolitical organisations representative of wider religious movements they like to present themselves as. They should not be seen as speaking on behalf of all religious or faith-based organisations. They are rather political initiatives – often of the far right – that have a clear goal of entering the political mainstream to enforce a restrictive policy agenda on all of society on all matters which are not compatible with their beliefs.

Anti-choice actors are part of a wider anti-gender movement, which gathers groups opposed to feminism, LGBT rights, gender studies, gender mainstreaming, the fight against gender-based violence as well as contraception, abortion, sexual education, civil partnerships and same-sex marriage. The proponents of the anti-choice agenda lump these issues together under the umbrella term ‘gender ideology’ or ‘gender theory’, coined by the Vatican 20 years ago.