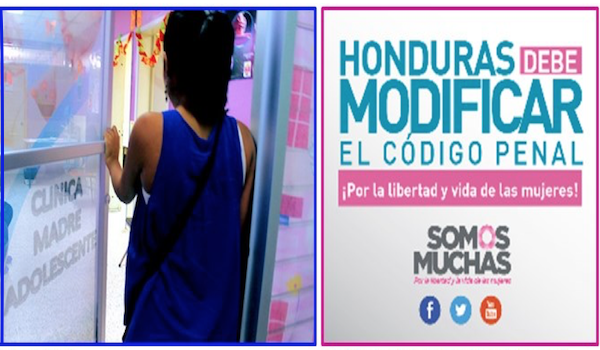 In a 19 April article in La Prensa.hn from Honduras, the headline read: “Members of Parliament discuss the issue of abortion with calm”. But apart from a photograph of a huge anti-abortion banner below the headline, that was the only mention of abortion law reform in the article – or calm – apart from tiny text below the photo that said abortion was a polemical issue. The article did  say, however, that a multi-party Special Commission of the House of Deputies has been meeting to draft reforms to the entire Penal Code, including on abortion. The issue of whether they would achieve consensus on any of the topics was the main discussion point.

A second article, also in April, in Revistazo, which consists mainly of photographs which each link to the full stories, reports that four abandoned babies are found in the rubbish in the capital Tegucigalpa each month, that a safe abortion costs LPS 4,400 and is not difficult to find, that teenagers learn about abortion over the internet and by word of mouth, and that 50,000 adolescent girls per year are stigmatised by early motherhood in Honduras. In regard to the latter, it talks about them going to class with a baby in their backpacks. Honduras has the second highest number of teenage pregnancies in Latin America, according to a UN report released in November, and one in four births is to a child under the age of 19 years. The government would like to lower this rate. But the article also points out that many of these young girls who can find only an unsafe abortion die. So what will the government decide to do?

Also on 19 April, the Honduran group Somos Muchas, a coalition of over 20 organizations as well as individual feminists and activists, and including religious leaders, legal and health professionals, sexual diversity activists and sex trade workers, posted a press release on Twitter. It says this is the first time in 33 years that the Penal Code is being reformed. They call on the Deputies to vote in favour of decriminalising abortion on three grounds: if the woman’s health is at risk, if the fetus has a fatal malformation, or if the pregnancy is the result of rape or incest.

According to a report opinion poll, 62% of people in the country support decriminalisation on these 3 grounds.

They report that Honduras is a country with high rates of poverty, violence and impunity. In 2015, there were 2,200 reports of sexual violence, and each year over 900 girls aged 10-14 become pregnant due to rape. Perpetrators are rarely found guilty. Of all maternal deaths in Honduras each year, 20% could be prevented if abortion was decriminalised to protect women’s health.

They point out that a woman with cancer cannot terminate a pregnancy even to access lifesaving treatment, a  10-year-old rape victim must risk her life and give birth, and a woman who learns that her fetus will die at birth is forced to continue the pregnancy, risking physical and emotional trauma.

This is defined by the UN Special Rapporteur against torture as a form of cruel and degrading treatment.