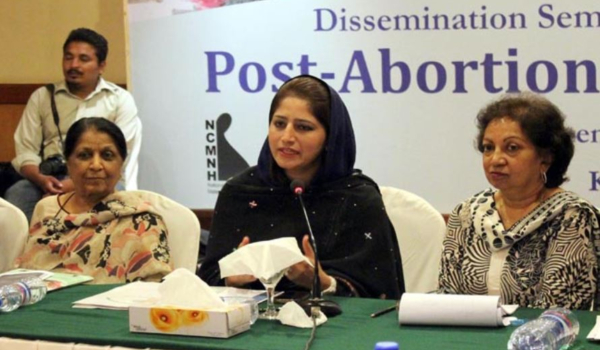 When at 19 Mehnaz became pregnant for the fifth time, she panicked. She already had four daughters, and her husband was threatening to throw her out if she had another. So she had an abortion. “I kept taking tablets – whatever I laid my hands on,” she says. “I lifted heavy things” – like the furniture in her tiny living room. She drank brews of boiled dates – many Pakistanis believe the beverage triggers labour. Then she felt a terrible pain in her stomach. Her husband took her to a midwife, who told him the baby was dead. “She gave me injections and it came out,” Mehnaz says. That was eight years ago. Since then she has had two more abortions.

In spite of being a deeply conservative Muslim country, Pakistan is estimated to have one of the highest rates of abortion in the world, based on a 2012 study by the Population Council. The rate in 2012 was 50 abortions for every 1,000 women aged 15 to 44.

According to family planning researchers, abortion is legal only in very limited circumstances, i.e. the pregnancy is dangerous for the woman’s health or if there is a “need” for abortion, though what constitutes “need” is not defined say. Hospitals generally refuse to provide abortion because most doctors believe it is illegal, and even when they know it would be allowed, they cite their own cultural beliefs not to undertake abortions except in urgent cases, which leaves women at the mercy of clandestine abortion providers.

According to Population Council research, most of the women who seek abortions are married, poor and have already had 3-5 children. Only 30% of fertile-age women use modern contraceptives, according to a 2017 UN report.

Pakistan’s high abortion and low contraception rates reflect a family planning policy in shambles, according to Abdul Ghaffar Khan, Director General of Pakistan’s population programme. His office is meant to set the national family planning agenda, but he described the situation as “a bureaucratic mess”. Family planning used to be the job of the federal government, but approval for a national policy languished for years. In 2011, national authorities passed the matter to provincial governments. But at the provincial level, family planning is not part of the health ministry’s portfolio. It is part of a different office and has long been neglected and underfunded, Khan says.

That means women aren’t advised about contraception or supplied contraceptives when they are most amenable: after childbirth, receiving post-natal care or immunising their babies, says Sathar of the Population Council. She described it as one of the chief “structural flaws of how we provide family planning”. But changes may be coming. On July 4, Pakistan’s Supreme Court demanded hearings into the country’s family planning failures. A national policy may be put into action in the coming months, Khan says.

National Public Radio (USA) visited the “clinic” of one woman in Karachi aged 60, with no medical qualifications, who said another midwife had taught her how to induce abortions using medications freely available in Pakistan. Citing her religious faith, she says she would only help women who she believed were already miscarrying. She showed them those pills and injections, which were clustered on a dusty table alongside religious texts and a bag of onions in a dank room with peeling paint. The gurney where she treated women was littered with clothing. “I wipe it down before women come in,” she says. Researchers estimate about a third of all women who attempt abortions in Pakistan suffer complications, ranging from heavy bleeding to a perforated uterus and deadly infections.

Some health workers do reach out to women to provide information about family planning – 130,000 Lady Health Workers are employed by provincial health ministries to do home visits across the country, teaching about birth control. But they get limited training and they are in short supply. Budgetary shortages, supply problems and corruption mean they often don’t have contraceptives, or distribute expired contraceptives – and there is little follow-up.