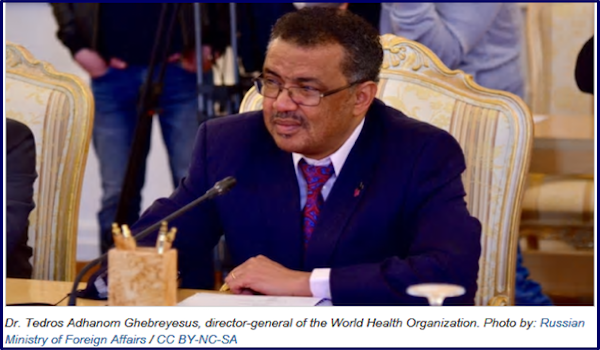 The past decade has seen tremendous progress toward women’s sexual and reproductive health and rights around the world, especially access to safe abortion. As Dr Tedros Adhanom Ghebreyesus takes the helm of the World Health Organization as its new Director-General, we can’t go backwards…

Tedros’ leadership at this time, when many countries “are stepping up their efforts to roll back progress on women’s and girls’ sexual and reproductive health and rights,” is vital. We must not let the unprecedented expansion of the United States “global gag rule” and other countries’ regressive efforts deny women their right to health and block their ability to obtain a safe abortion…

Ethiopia is a success story that highlights how, in a short time and with limited resources, strategic introduction of legal abortion integrated with contraceptive counseling and service delivery can produce significant public health benefits. When Ethiopia’s abortion law was liberalized in 2005, the contribution of unsafe abortion to maternal death was 32%. After 10 years of implementation of the revised law this figure has gone down to 10%.

…Since 2005, thousands of health care providers have been trained and hundreds of thousands of women have received high-quality legal abortion services. Efforts to introduce and scale-up safe legal abortion were spearheaded by the Ethiopian Ministry of Health – led by then-Minister Tedros – with contributions from several international NGOs, including Ipas.

Some of the things we did together have proved particularly important: Decentralizing abortion care; training mid-levels or non-physicians to provide abortion; integrating contraceptive services with abortion care; offering women the option of medical abortion — abortion with pills; and selectively introducing second-trimester abortion.

Although challenges remain, Ethiopia’s experience builds the global evidence on the positive health impacts of legal abortion… There is still work to be done, including achieving sustainability of these services and total ownership of this care by the Ethiopian government, including allocation of budgetary resources toward this area.

As WHO Director-General, I hope that Tedros will encourage other countries to follow this example. Countries should legalize abortion – it saves lives. They should allow midwives and non-doctors to provide abortion, as WHO guidance suggests…

The WHO has so far led the way to improve abortion access. In Ethiopia, we closely followed the WHO Safe Abortion Guidance, which has informed the revision of national standards, guidelines, and clinical protocols, as well as legally restrictive abortion laws. The WHO guidance strongly supports Ipas’ and other partners’ work to promote access to safe abortion.

Now, in 2017, Ethiopia has increased access to abortion, including medical abortion, and has successfully integrated contraception into comprehensive abortion care. We have witnessed the benefit of making safe abortion to women and girls. This is a great achievement; though we know we must do more. But with strong support from the WHO, we’re up for the challenge.

And in turn, I hope that the new Director-General, Tedros, will speak out on the global need for safe, legal abortion; call for rigorous research and better data on abortion; stand up to the US government; and support women and girls around the world.