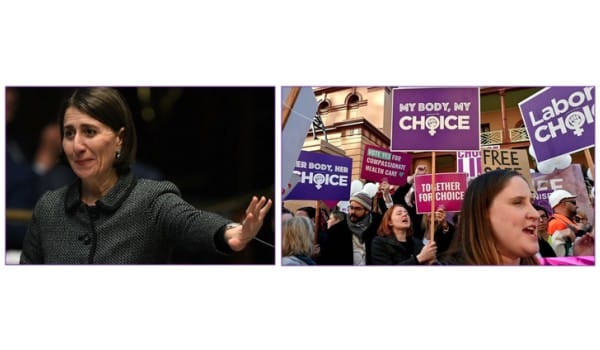 A committee hearing in the upper house of the NSW parliament on the bill to decriminalise abortion in New South Wales (NSW) opened on 14 August. Religious leaders were among those giving evidence, including Sydney’s Catholic and Anglican archbishops, as well as Jewish, Maronite and Coptic Orthodox representatives. That same day, SBS News reported that two MPs who had voted against the bill had received death threats, which were being investigated by police.

The committee had to report back to the upper house by 20 August. Debate on the bill began in the upper house on the evening of 20 August. The bill allows terminations up to 22 weeks and also later if two doctors, considering all the circumstances, agree the termination should occur. The bill comfortably passed a vote in the lower house of the NSW parliament by 59 to 31 earlier this month (see Campaign report).

As the debate opened in the upper house, however, outside, reports said “thousands” of anti-abortion protesters held a rally. In a brief video of the rally, most participants appeared to be men holding up placards with disembodied fetuses saying “Who will protect me?”. According to other media, participants were carrying crosses and pictures of Jesus. They heard speeches from anti-abortion MPs and religious leaders. Anti-abortion opponents in parliament claimed meanwhile that they had been denied any opportunity to participate in the process.

NSW Premier Gladys Berejiklian, who supports decriminalisation, dismissed claims that the bill was rushed through. “I have been in parliament for nearly 17 years and I can’t remember a bill having so much debate in the lower house,” she said. However, pressure from members of her own party led her to delay the vote in the upper house until the week of 17 September, after the imminent 3-week parliamentary recess. The debate continues this week, but amendments will be considered and the vote taken only in September.

Several anti-abortion MPs are calling for an amendment to the bill to criminalise sex selective abortions. But Dr Danielle McMullen, Vice President, Australian Medical Association NSW, argued against introducing such an amendment, because of the dilemma for doctors providing abortions after 12 weeks, when a scan could identify fetal sex. And both she and the state’s chief obstetrician advised Ms Berejiklian that sex selection terminations were “not an issue in NSW”. However, Gladys Berejiklianseemed to open the door to an amendment “if it will help ease community concerns”. But which community does she mean apart from her own MPs?

Independent MP Alex Greenwich, who tabled the bill, said: “The NSW Legislative Assembly and people across the state have sent a clear message that it’s time to decriminalise abortion.” Indeed, a clear majority of voters in New South Wales either strongly support or somewhat support removing abortion from the criminal code, according to the latest Guardian Essential poll, published this week.

The poll showed that 71% of voters in the sample support the law change (44% strongly and 27% somewhat) with only 17% against the change (8% somewhat opposed and 9% strongly opposed). 12% were unsure. Brinkwire, who reported these findings, said: “While the sample size is small (1,096 respondents) because the abortion question was only put to NSW voters in the regular national survey, the sanguine voter sentiment represented in the poll is at odds with the clamour and contention in the political debate. Religious leaders, rightwing MPs and conservative media commentators have mounted a noisy campaign to derail the legislation ahead of the final vote.”

“Nothing will change in the next three weeks, but the same group of MPs, the same religious leaders, and the same political commentators will continue to present distorted information, disrespect women and make more attempts to further frustrate the process,” McCarthy said. “I have been campaigning to see these laws changed for 50 years. We have waited too long and the women and doctors of NSW should not have to wait any longer.”