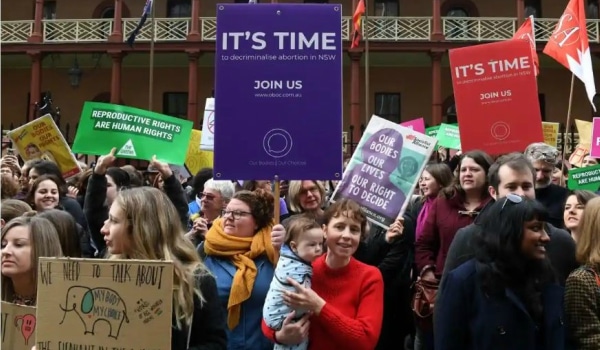 The Reproductive Health Care Reform Bill, pending in the New South Wales (NSW) parliament, has attracted widespread support. It was due to be debated last week but was delayed to this week after anti-abortion MPs complained that they hadn’t had time to prepare themselves. The bill primarily seeks to remove three sections of the NSW Crimes Act that criminalise “attempting to procure an abortion by administering drugs or using instruments or other means”. If passed, it will end the 119-year criminalisation of abortion in the state, based on British law from 1861. Abortions have been available however, and since 1971 prosecutions have been rare. This is due to a ruling by Judge Aaron Levine in NSW District Court who drew attention to the fact that abortion itself is not a crime in the NSW act, and that only unlawfully performed actions are punishable. The interpretation of “lawfulness” is reinforced in the NSW Ministry of Health’s policy framework for terminations in public health organisations.

Support for the bill is coming from a wide range of sources. The demonstration pictured above drew hundreds of supporters. And a woman who had a termination in 2005 started an #ArrestUs campaign on Facebook and Twitter on 5 August, inspired by 80 women in the 1970s who took out an advertisement in a national newspaper to campaign for legalising abortion. No opinion poll has ever found more than 5-10% of voters opposed to abortion.

The President of the Royal Australian and New Zealand College of Obstetricians and Gynaecologists, Vijay Roach, said abortion simply does not belong in the Crimes Act. “This is an issue of compassion, respect and health care, and abortion care is part of health care. Wider society needs to recognise the autonomy of women and their right to make decisions about their own body.” The Australian Medical Association is also supporting.

The Medical Director of Family Planning NSW Deborah Bateson said support for decriminalising abortion was widespread in the medical world, that “a doctor has an obligation not to make a decision for the woman”. Reverend Simon Hansford of the Uniting Church has also spoken up, and said he believes abortion should not be treated as a criminal issue and moral judgement should not be passed on the act itself: “There’s a whole series of understandings of what terminations are about. The reasons for it, women’s lives, children’s lives — a whole range of things and it can’t be simplified down into a black and white issue.”

The new bill will be put forward by independent Member for Sydney Alex Greenwich, who says it has more support than any other piece of legislation in the history of Parliament with its 15 co-sponsors. Premier Gladys Berejiklian and Health Minister Brad Hazzard are among those who have pledged to vote for the bill. In the chamber as the bill was being read last week were the Health Minister, Leader of the House Andrew Constance, as well as Greens, Labor, Liberal and National MPs. The NSW Pro Choice Alliance were in the public gallery.
SOURCES: The Conversation, by Helen Pringle, 31 July 2019 ; Sydney Morning Herald, by Alexandra Smith, 1 August 2019 ; ABC Australia, by Paige Cockburn, 4 August 2019 ; The Guardian, by Lisa Martin, 5 August 2019 ; PHOTO: Dean Lewins/AAP