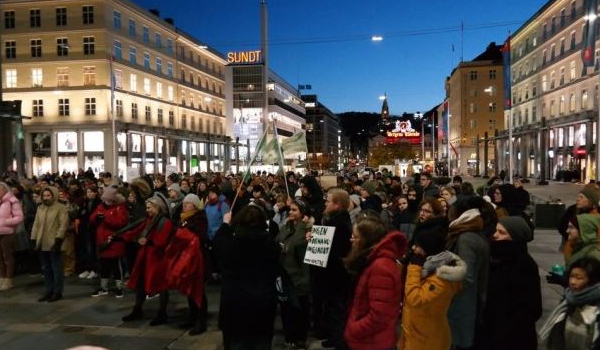 On 30 October 2018, there were 2,000 people in a demonstration in Oslo against Prime Minister Erna Solberg, who is trying to change the abortion law so that she can gain the support of the Christian Democratic Party for a coalition government. This party is currently considering whether to go into coalition with a conservative government or a social democratic government.

Emily McLean, member of Women’s Front, spoke at the rally in Bergen the same day, which about 300 people attended. She said:

A cold blast from the past has again shown its face. Our Prime Minister has agreed to renegotiate women’s life, health and equality in order to stay in power. That is disgraceful. That we cannot accept.

Many wish to remove Paragraph C of the abortion law. This paragraph has misleadingly been called “the Downs paragraph” but that does not explain what it is about. Paragraph C is about securing women the right to abortion if there is a high risk that the child will have serious problems. It is not about some children having more or less worth than others. It is about a woman’s right to assess her own capacity to take care of a child with large physical and mental challenges or maybe even with something so serious that it is incompatible with life. It should anyway always be each woman’s individual decision. We have to stop placing the responsibility for a diverse society on women’s abortion decisions. That is unfair. That creates shame.

Fetal reduction is another right our Prime Minister is willing to remove. She might be unaware that the same principles also apply in this case, that each woman should have the right to decide how many children she wants and when she wants them. Fetal reduction is no different from any other abortion. To curtail women’s right to decide how many children they want is an attack on the abortion law.

Prime Minister, are you willing to let the long, hard and painful fight women fought go down the drain to get yourself three more years in government? Creating small cracks in the law is a slippery slope that might end up with a restricted abortion law that will be a threat to women’s life and health. That cannot happen. Because the abortion law is not for sale!

It has gone too far when power means more than women’s right to decide over their own bodies. Women have the best knowledge of their situation and we have to trust that they take the decision that is best for them. Because only they can know. Different people have different reasons to have an abortion. It is not up to the society to decide for them. We all have a fundamental right to decide what happens to our own bodies. This cannot be compromised.

So Prime Minister, if we do not make sure that women have access to safe abortions they will find other, often dangerous, methods to have them anyway. You therefore have to stop gambling with women’s lives as part of a political power play and instead make sure that abortions are now and in the future safe and available for all women. Our lives, Our bodies, Our choice!