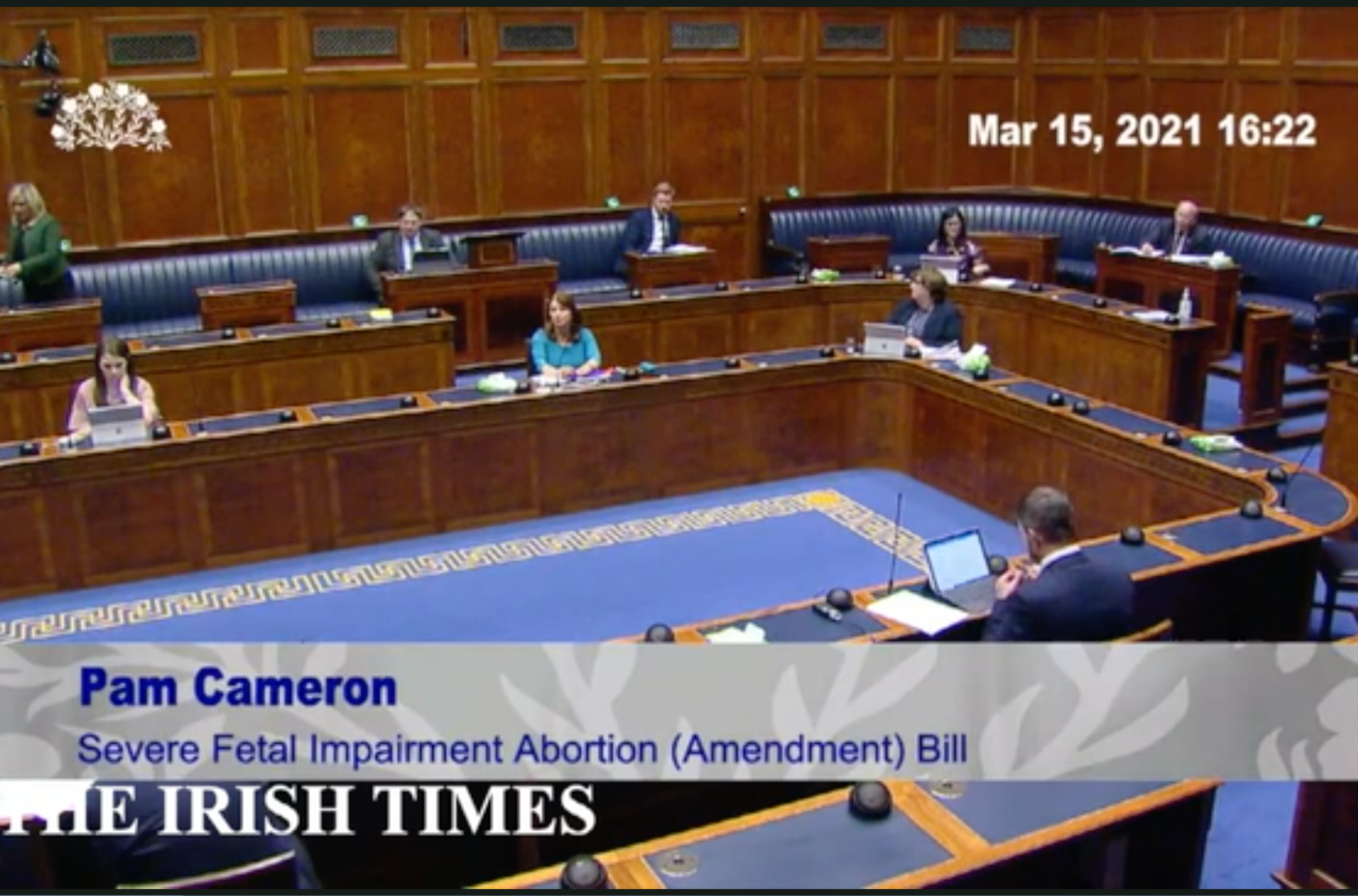 An anti-abortion bill, called the Severe Fetal Impairment Bill, seeks to amend the law in Northern Ireland to prevent abortions in cases of non-fatal fetal anomalies, including Down’s Syndrome. The justification given for wanting to amend the legislation allowing abortions, brought in in London at the UK Parliament last year, was “to show that people with disabilities are ‘equally valued’. The bill had its second reading on 15 March 2021, and was backed by a majority of 48 votes to 12 in the Northern Ireland Assembly. It will now go forward for scrutiny at the Assembly’s Health Committee.

The visual above is from a video of part of the debate, published by the Irish Times, in which three women members of three different parties in the Assembly spoke in regard to the bill, which was proposed by the right-wing Democratic Unionist Party (DUP). Unexpectedly, the speaker from Sinn Fein, who you hear first, who starts off expressing “deep unease about this narrow piece of legislation” said her party was going to abstain, not oppose the bill.

This was unexpected and brought condemnation from all sides, not least because Sinn Fein had announced two days earlier, on 13 March, that they were going to bring a proposal to the NI Executive to have abortion services commissioned in Northern Ireland, which the DUP have been blocking. Indeed, Sinn Fein’s party leader was quoted on BBC News as saying it was “totally unacceptable” that commissioning was still delayed, even though new laws came into force in 2020.

The DUP claimed that the bill “tackles disability discrimination and how the law perpetuates stereotypes”. The debate showed the issue was very divisive. The DUP leader, who is outspokenly anti-abortion, said she feared the issue of abortion was entering into the “area of eugenics”. in response, Claire Bailey of the Green Party, the second speaker in the video, condemned the bill and said “it would simply make it harder for women to access abortions and… was designed to curb the rights of women”, who would have to travel to other parts of the UK for abortions.

Three other executive parties allowed their members to vote “according to their conscience”. Alliance MLA Paula Bradshaw also said the bill was about “the ongoing denial of women’s rights”. She said: “We need to end this nonsense” that women faced with a complex pregnancy or a crisis pregnancy want “abortion on demand”.

The bill was backed by some disability rights campaigners.