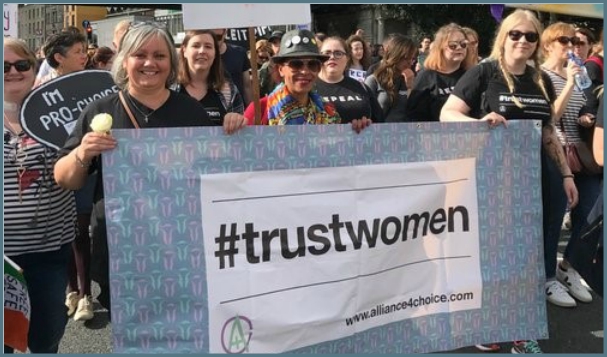 The submission argued that in NI: “assisting with or procuring an abortion is criminalised, punishable by a maximum sentence of life imprisonment and the availability of abortion is highly restricted”. It alleged the failure of the UK, inter alia, to: “(a) establish a comprehensive legal framework to protect and guarantee NI women’s right to abortion; (b) ensure that NI women are not exposed to the health risks of unsafe abortion; and, (c) address social, practical and financial obstacles in accessing abortion, which disproportionately affect rural women”. Finally, it alleged that “the legal framework on abortion discriminates against NI women. Further, accessing abortion is impeded by the prevailing “anti-choice” rhetoric in churches, schools and local politics”.

CEDAW Vice-Chair Ruth Halperin-Kaddari visited Northern Ireland in 2016 to conduct a confidential inquiry into these allegations, together with then-CEDAW member Niklas Bruun. At all stages of the proceedings, the Committee received the full co-operation of the UK Government.

The findings are described in depth in a 19-page report. The inquiry found that the situation gives Northern Irish women “three deplorable options: (a) undergo a torturous experience of being compelled to carry a pregnancy to full term; (b) engage in illegal abortion and risk imprisonment and stigmatisation; or, (c) undertake a highly stressful journey outside NI to access a legal abortion. Women are thus torn between complying with discriminatory laws that unduly restrict abortion or risk prosecution and imprisonment.”

The report concludes that the UK is in violation of a number of articles of the UN Convention on the Elimination of Discrimination against Women.

“Denial of abortion and criminalization of abortion amounts to discrimination against women because it is a denial of a service that only women need. And it puts women in horrific situations,” said Halperin-Kaddari, a law professor specialising in international women’s rights. Women’s mental anguish was exacerbated when they were forced to carry to term a non-viable fetus (in cases of fatal foetal abnormality) or where the pregnancy resulted from rape or incest, she continued, adding that forcing a woman to continue with her pregnancy in such a situation amounted to unjustifiable State-sanctioned violence.

Clause 82 of the report states:

The systematic nature of the violations stems from the deliberate retention of criminal laws and State policy disproportionately restricting access to sexual and reproductive rights, in general, and highly restrictive abortion provision, in particular. Westminster and NI authorities acknowledge the magnitude of the phenomenon and choose to export it to England where NI women travel to access abortions. The UK’s observations and interviews with NI authorities clarify the deliberate intention neither to decriminalise abortion nor to expand the grounds for legal abortion. Availability of abortion in other parts of the State party does not absolve it of its responsibility under the Convention to ensure accessibility in NI.

The report makes 13 urgent recommendations for action by the UK government, starting with:

(a) Repeal sections 58 and 59 of the Offences against the Person Act, 1861 so that no criminal charges can be brought against women and girls who undergo abortion or against qualified health care professionals and all others who provide and assist in the abortion;

(b) Adopt legislation to provide for expanded grounds to legalise abortion at least in the following cases:

(i) Threat to the pregnant woman’s physical or mental health without conditionality of “long-term or permanent” effects;

(ii) Rape and incest; and

(iii) Severe fetal impairment, including fatal fetal anomaly, without perpetuating stereotypes towards persons with disabilities and ensuring appropriate and ongoing support, social and financial, for women who decide to carry such pregnancies to term;

(c) Introduce, as an interim measure, a moratorium on the application of criminal laws concerning abortion, and cease all related arrests, investigations and criminal prosecutions, including of women seeking post-abortion care and healthcare professionals;

(d) Adopt evidence-based protocols for healthcare professionals on providing legal abortions particularly on the grounds of physical and mental health; and ensure continuous training on these protocols… [and much more…].

Only one recommendation was unclear, which called for collection and sharing of data on self-use of medical abortion pills between two government departments. Why this is called for, and so near the end of the recommendations, with no explanation, is unclear, given that the report recommends not prosecuting self-use.

On 22 February 2018, the UK Government submitted its observations on the report of the inquiry.