Home » News » NORTHERN IRELAND – The video of the song 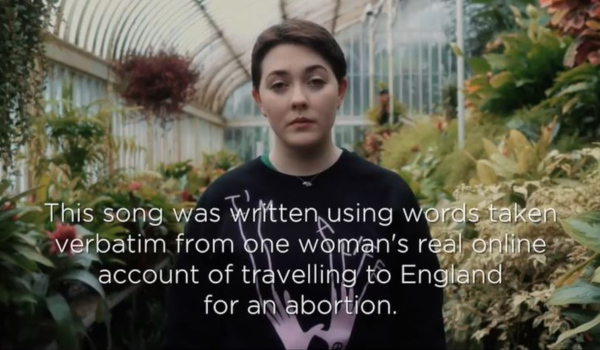 The Song
Janet, whose incredible words are used for the song told us when she watched the video:
“I cried. The opening line had me catch my breath, and the next thing I knew I was crying. They were complex tears, of surprise, tinged with sadness & then of joy. When I shared my story 4 years ago, I had no idea of the impact it would have, I am deeply honoured to hear some of my words in Isobel’s song and I hope it had a profound effect on people as it did me.”

The song _4284_ / I’m A Life, is Janet’s account of her journey to England for an abortion. The title reflects both her own words and also highlights the numbers who travelled from Northern Ireland & the Republic of Ireland to access abortions in 2015. Her words; “You can try and shame me, but you forgot I’m a life…” remind us how the damaging rhetoric of those in power continue to control the lives and bodies of women and pregnant people in Northern Ireland.

The Artist
Isobel Allen has worked closely with Northern Ireland Alliance for Choice and has high hopes they can alert beyond Northern Ireland awareness of the dire situation through this emotionally raw music video:

“I had wanted to write about the abuse of reproductive rights in Northern Ireland since I had moved to Belfast in 2009, but I found it difficult to know exactly how without misrepresenting people’s lived experience of the issue. Then, more and more people started sharing their stories online, and when I read Janet’s incredibly moving account, the song came together.”

Alliance for Choice believe that 2019 will be their year but know it will not be easy. They saw how real people’s stories moved voters in the Irish referendum campaign, so they now wish to facilitate workshops bringing the stories of abortion seekers to people across Northern Ireland. If they raise their target they will also crucially be able to extend their outreach to the UK where they need people to urge their MPs in the British Parliament to vote for a change. Emma from A4C adds:

“We are so honoured to have Isobel approach us with her song. It’s such a beautiful song. Any outreach we have done so far has made a tangible difference to abortion stigma and understanding of the status quo in NI, now more than ever we need to grow our allies all across the UK and Ireland. We have the passion, expertise and are keenly aware what’s at stake, we just need the resources to keep it going.”

Alliance for Choice in Northern Ireland have produced this video for a fundraising campaign. The fundraising target was met and the video has been shared widely and covered by local and UK press. The idea was to reclaim the use of “life” by the anti-choice people, we made merchandise that we featured in the video that was so popular it was sold out twice! The artist who made the song won a women in music award and wanted to use part of it in collaboration with us to raise the profile of the issue outside of NI and in Great Britain. The video features activists from Alliance for Choice, some of whom have spoken about their own abortions overseas or illegally with pills at home. Enjoy!