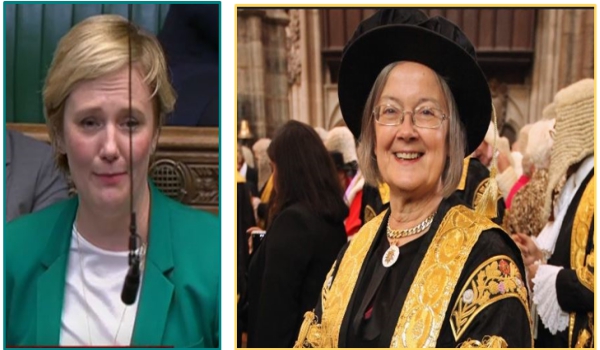 “I was saying at work yesterday, it’s a bit like when the Berlin Wall came down – just 8 months ago, none of the main parties on the island of Ireland supported abortion rights. Now, the majority do and the rest are trying to catch up.” Goretti Horgan, Northern Ireland Alliance for Choice

Following on from the incredible energy generated by the referendum win in Ireland, Labour member of the UK parliament Stella Creasy tabled an emergency debate seeking support for tabling an amendment to the upcoming domestic violence bill to remove sections 58 and 59 from the 1861 Offences against the Person Act, which make it illegal to have an abortion or provide a woman with the means to have an abortion or to carry out an abortion on a woman. These clauses have been carried into the criminal codes of many former UK colonies, where they operate to this day to make all abortions illegal unless exceptions have been allowed in subsequent laws. Removing these clauses would effectively decriminalise abortion up to 24 weeks of pregnancy across the UK.

The debate lasted three hours. The House was fairly empty, especially on the Conservative benches, not least because the Prime Minister does not support any interference in Northern Irish devolved issues. Most of the members of parliament who participated were from the Labour Party and were there to support Stella Creasy. What was incredible, and unprecedented, was that women were in the majority in the room and in the debate, and even more incredible was the extent of the support from Conservative Party women who spoke, along with support from those from the Green, Scottish National and Liberal Democratic parties, which was equally strong but expected. A few were there from Scotland and Northern Ireland to insist on the importance of honouring devolution. And a few were there from Northern Ireland to oppose any change in Northern Irish or UK abortion law at all – vehemently. Although those of us who are abortion rights advocates did not agree with every word, even from our supporters, it was certainly a debate to feel proud of. It’s worth watching.

Then, two days later, the UK Supreme Court gave its ruling in the Northern Ireland Human Rights Commission (NIHRC) appeal. The appeal considered whether the Offences Against the Person Act 1861, sections 58-59, and the Criminal Justice Act (Northern Ireland) 1945, section 25 are incompatible with European Convention on Human Rights, Articles 3, 8 and 14 in failing to provide an exception to the prohibition of the termination of pregnancy in Northern Ireland in cases of serious malformation of the fetus or pregnancy as a result of rape or incest.

The judgment revealed a split court. A majority – Lord Mance, Lord Kerr, Lord Wilson and Lady Hale – held that the current law in Northern Ireland is incompatible with the right to respect for private and family life, guaranteed by Article 8 of the Convention, insofar as it prohibits abortion in cases of rape, incest and fatal fetal abnormality. Lady Black agreed with that in regard to fatal fetal abnormality. Lord Kerr and Lord Wilson also held that it is incompatible with the right not to be subjected to inhuman or degrading treatment, guaranteed by Article 3 of the Convention. Lord Reed and Lord Lloyd-Jones held that the law is not incompatible with either Article 8 or Article 3.

Secondly, a majority (4) of the court ruled that the NIHRC did not have standing to bring these proceedings and accordingly that the Supreme Court had no jurisdiction to declare that the NI law was incompatible with the Convention. A minority – Lord Kerr, Lord Wilson and Lady Hale – held that the NIHRC does have standing and they would have made a declaration of incompatibility. Lady Hale argued that the incompatibility had no force because the NIHRC could readily have found women who either are or would be victims of an unlawful act under the Human Rights Act 1998 and either supported or intervened in proceedings brought by those women. Unfortunately, NIHRC had not done so, and the majority of the court did not agree with Lady Hale on this.

The words of Lord Mance call upon the Northern Irish legislature, in as strong terms as its possible without a formal declaration of incompatibility, to urgently consider amending the law: “I am in short satisfied that the present legislative position in Northern Ireland is untenable and intrinsically disproportionate in excluding from any possibility of abortion pregnancies involving fatal fetal abnormality or due to rape or incest… [T]he present law clearly needs radical reconsideration… Those responsible for ensuring the compatibility of Northern Ireland law with the Convention rights will no doubt recognise and take account of these conclusions, at as early a time as possible, by considering whether and how to amend the law, in the light of the ongoing suffering being caused by it as well as the likelihood that a victim of the existing law would have standing to pursue similar proceedings to reach similar conclusions and to obtain a declaration of incompatibility in relation to the 1861 Act.”

Although technically the case was lost, if any woman decides to go to court in Northern Ireland to mount a challenge to the NI abortion law on the same grounds as the NIHRC, because of the strength of the Supreme Court’s ruling, she would definitely win the case. And then law reform would have to follow. In fact, it has taken only a few days for a woman to come forward to do just that. A Belfast woman who travelled to Britain for an abortion is to take a case to the High Court in her home city, supported by Amnesty International Northern Ireland.