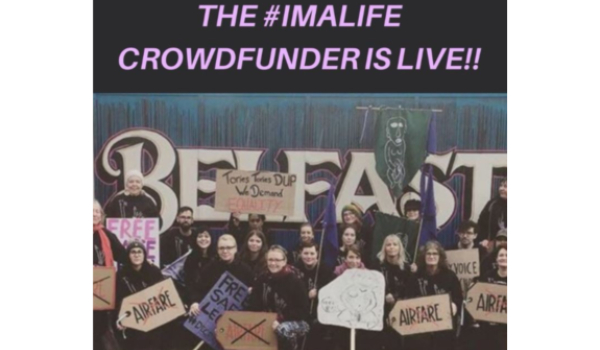 On 1 February, the NI Alliance for Choice launched the teaser to a powerful and moving music video with Isobel Anderson, a popular Belfast-based singer and musician. If they can raise £5,000 by 2 March, they will be able to make the full 5-minute music video of her singing a song about a personal abortion experience live that evening at a special event in Belfast.

The song, _4284_ / I’m A Life, is Janet’s account of her journey to England for an abortion. The title reflects both her own words and also highlights the numbers who travelled from the north and south of Ireland to access abortions in 2015. Her words; “You can try and shame me, but you forgot I’m a life…” remind us how the damaging rhetoric of those in power continue to control the lives and bodies of women and pregnant people in Northern Ireland.

Janet said when she watched the video: “I cried. The opening line had me catch my breath, and the next thing I knew I was crying. They were complex tears, of surprise, tinged with sadness & then of joy. When I shared my story 4 years ago, I had no idea of the impact it would have, I am deeply honoured to hear some of my words in Isobel’s song and I hope it has a profound effect…”

Isobel said: “I had wanted to write about the abuse of reproductive rights in Northern Ireland since I had moved to Belfast in 2009, but I found it difficult to know exactly how without misrepresenting people’s lived experience… Then, more and more people started sharing their stories online, and when I read Janet’s…, the song came together.”

Alliance for Choice saw how real people’s stories moved voters in the Irish referendum campaign, so they now wish to facilitate workshops bringing the stories of abortion seekers to people across Northern Ireland, and extend their outreach to the UK as a whole.

Sarah Ewart was forced to travel to England for an abortion after being told the fetus would not survive outside the womb. “Time and time again I’ve told my story to MPs, courtrooms and judges. Each time I re-live the trauma. I hope this will be the last time to go to court and prove that women like me should be able to access abortion services at home,” says Sarah Ewart. Her case in the Belfast High Court, which began on 30 January, could find Northern Ireland’s abortion law in breach of the UK’s human rights commitments.