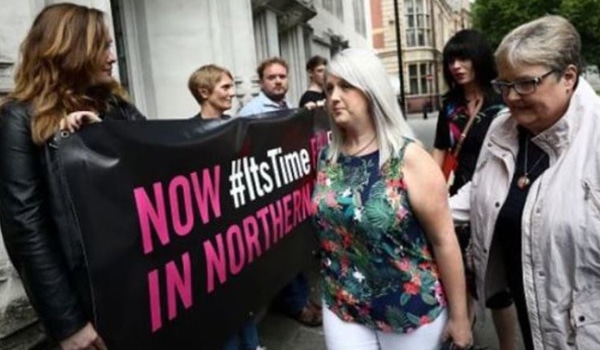 The ruling, on 3 October 2019, was on a case brought by Sarah Ewart, 29, who was denied a termination in 2013 despite an ultrasound scan showing that the fetus she was carrying would not survive. She was forced to travel to England to terminate her pregnancy, and she took this case seeking to ensure that no other woman would have to go through that. “This must be the last time a woman is put through the agonising court process because she needs access to a healthcare service that is freely available elsewhere,” she said when the judgment was announced. Amnesty International was an intervenor in the case.

The Court’s ruling means it will deliver a formal declaration confirming that Northern Ireland’s abortion law is incompatible with the UK’s human rights obligations.

In July 2019, the UK Parliament passed the Northern Ireland (Executive Formation) Act, which will decriminalisation abortion and make it lawful, including in cases of risk to health, sexual crime and where there is a serious or fatal fetal abnormality. The ruling puts pressure on the UK’s Northern Ireland Office to ensure a swift transition to free, safe, legal and local abortion services.

This case was launched following a UK Supreme Court judgmentin June 2018, in which five of the seven judges ruled that Northern Ireland’s abortion law breaches the UK’s human rights obligations. That Court was unable to issue a formal declaration of incompatibility because the Northern Ireland Human Rights Commission (who brought the case) was not itself a ‘victim’ of any unlawful act.Amnesty subsequently launched this new case with Sarah Ewart, in the hope that by bringing an individual’s case to the Belfast High Court, the declaration of incompatibility would be achieved.

Official data show that only 12 legal abortions took place in Northern Ireland in 2018, while 900 women and girls travelled to Britain for a safe abortion. Among them was a 12-year-old rape victim, who was forced to travel with a police escort.

There is opposition to a change in the law in Northern Ireland, but in fact, some 70% of the population support this change, which is due to come into effect after 21 October. Some of the loudest opposition is coming from an imported US campaign group, who decided to harass the Member of Parliament who tabled the bill in the UK Parliament to reform NI’s law, Stella Creasy. She said this group had turned up in the local town centre of her constituency in London with a 20-foot banner of her head next to an image of a dead fetus and a sign saying “Your MP is working hard to take away my human rights”. There has also been a campaign of intimidation and harassment against her on social media. She complained in the House of Commons and told MPs she had sought police assistance. The group have since removed the posters and stopped the harassment.