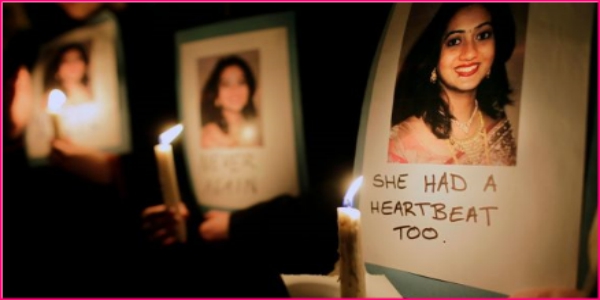 The anti-abortion movement may have coined a new slogan (Both Lives Matter) off the back of the US movement against racism and police brutality, called Black Lives Matter, but it is not a new concept for them. In fact, it is Catholic policy to claim that a pregnant woman’s life and fetal life deserve equal treatment and have equal rights. That is also what the 8th Amendment to the Irish Constitution says, which is why the abortion rights movement in Ireland is campaigning to have it repealed. Indeed, the future of the 8th Amendment was the subject of a Citizen’s Assembly in Ireland, which made its recommendations to the Irish parliament in July 2017. Most members of the Assembly recommended repeal and much more.

The billboard that the anti-abortion movement put up, which used their new slogan, Both Lives Matter, claims that 100,000 lives had been saved because of the restrictive abortion law in Northern Ireland. But this number was plucked from the air. They have no way of knowing whether it is anything close to the truth or a gross exaggeration.

Unfortunately, the Advertising Standards Authority dismissed the complaints lodged against the billboard for being misleading. As Elizabeth Nelson of the Belfast Feminist Network wrote: “It’s a fairly large number, 100,000, but nice and round. Easy to compute. Most of us could even divide it by 10, at a push. Apparently it is this convenient roundedness that led the (ASA) this week to dismiss the complaints…” She quotes the ASA: “We considered that 100,000 was a large, round number that readers would typically associate with estimates” – which they seem to have concluded was therefore unproblematic. So much for the validity of data provided to the public. Nelson concludes: “It is perhaps beyond the remit of the ASA to name this for what it is. But it is not beyond ours.”

And let us never forget that the claim is bogus that you can give equal rights to the woman and the fetus. That policy was the direct cause of death of Savita Halappanavar in Ireland and Valentina Milluzzo in Italy. In both cases, emergency obstetric care to save the women’s lives was needed, and that care included abortion. Yet abortion was refused until their lives were beyond saving, because there was still a fetal heartbeat – in spite of the fact that in both cases, the pregnancy was far too early for the fetus to survive no matter what.