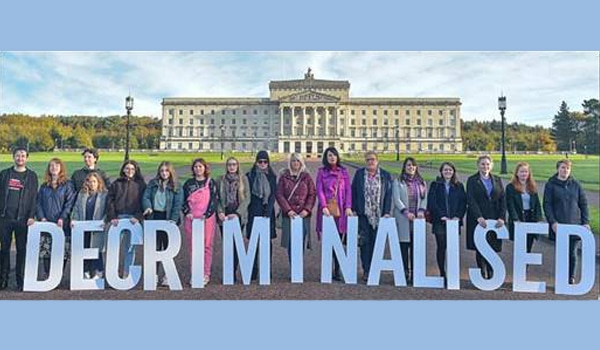 On 6 June, the Northern Irish parliament (Stormont Assembly) in Belfast debated a motion from the Democratic Unionist Party (DUP), a party heavily influenced by evangelical Protestantism. The motion read “That this Assembly welcomes the important intervention of disability campaigner Heidi Crowter and rejects the imposition of abortion legislation which extends to all non-fatal disabilities, including Down’s syndrome.”

This arises from an extremely unusual political situation that developed in 2019. The Storont Assembly had not met for a long time due to internal political disagreements, and in its absence, the UK Parliament in London had passed a bill in July 2019 legalising abortion in Northern Ireland in the first trimester, in line with the law pertaining in the rest of the country. They advised Stormont that the bill would go into effect on 21 October 2019, unless Stormont met before then and did something about it. This bill, which became law, arose from the fact that CEDAW had advised Northern Ireland the previous abortion law violated women’s human rights. Stormont did begin meeting again before 2019 ended, but not until after 21 October.

However, the advice of CEDAW is binding and means that even if Stormont wanted to revert to the almost total illegality of abortion that existed before, they could not do so. This is a situation that may be unique to Northern Ireland, given that it is both a part of the UK and has substantial independence in certain areas of law, including over abortion.

The DUP oppose abortion, so when Stormont returned, it was only a matter of time before they began attempting to undermine the new law, e.g. by trying to delay the provision of services. [The back story can be found inreports stretching back several yearson the Campaign website.]

Returning to the current situation, there was consternation among pro-choice activists when Sinn Féin, a party that calls itself ‘left-wing’, and has supported the decriminalisation of abortion in the North and the legalisation of abortion up to 12 weeks in the Republic of Ireland, did not oppose the motion. Rather, it sought to amend it to remove the reference to “the imposition of abortion legislation”. However, their amendment still accepted the DUP’s rejection of permittingabortion for what both parties called ”non-fatal disabilities”, a term that is clinically imprecise and unacceptable, since disabilities exist after birth, not before.

As activists sought to getSinn Féinto withdraw the amendment and oppose the motion in its entirety, they were shocked to learn that “Sinn Féin does not support CEDAWs recommendation to provideabortionin the case of severe fetal impairment.” This is significant, since abortion is not available for reasons of non-fatal anomalies in the Republic of Ireland either. In order to access an abortion for reasons of fetal abnormality there, a doctor must certify that the foetus will not survive more than 28 days. This is impossible, because for many lethal syndromes the newborn baby may live for months, even up to a year – and in great pain and distress. As a result, people who have had devastating diagnoses of a lethal syndrome in their wanted pregnancy have to travel to England, as they did before the law changed.

TheSinn Féinamendment did not pass but the unamended DUP motion did, by 46-40 votes. However, because it was a private member’s bill, it had no practical effect. On 4 June, the DUP raised the issue in the UK Parliament. The UK’s Northern Ireland Office Minister Robin Walker was robust in his response; he repeatedly told the DUP’s MPs that the NI Assembly can come up with alternative regulations if it wishes, but any regulations must be CEDAW compliant – and that includes allowing abortion in cases of severe fetal abnormality.

For now, the panic is over but access to abortion in Northern Ireland is as follows: The NI (Executive Formation) Act 2019 made first trimester abortion available on request. Abortion up to 24 weeks is also legal (though not available) if continuing the pregnancy is a greater risk to the woman’s physical or mental health than a termination. So the fight goes on.