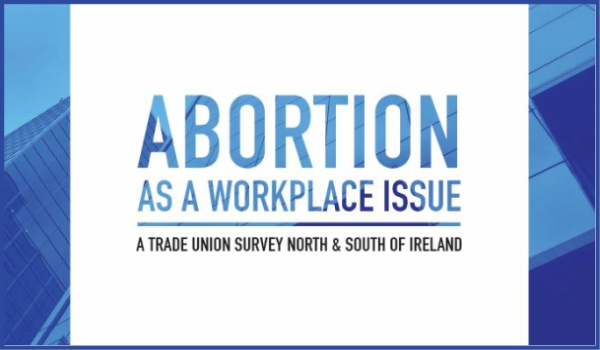 Preface, by the Steering Group, September 2017

With more than 700,000 members in over 40 affiliated unions, the trade union movement is Ireland’s largest civic society body. Over half our membership is women for whom highly repressive abortion laws in the Republic of Ireland and Northern Ireland are an impediment to full equality: without the right to make decisions about their own bodies, women are not truly equal.

We – Unite the Union, Unison, Mandate Trade Union, the CWU Ireland and the GMB – initiated and funded this unique cross-union, all-island survey to explore how such restricted access to abortion affects our working members.

The findings of our pioneering project give insight into how the need to travel abroad for medical treatment and the stigma that abortion carries are managed in the workplace. It considers how criminalisation impacts on access to abortion. The study gives us direct access to members’ views on practical advice and assistance we can offer those workers faced with a crisis pregnancy. For instance, it highlights how issues of finance, access to sick pay and sick leave led to some returning to work too early. Further, the findings indicate that many had not thought of abortion as being a workplace issue until their participation in the research. Results also indicate that there was support for unions lobbying for legal reform and advocating policy changes.

In a broader sense, the survey provides information of use to the wider trade union movement’s activities – and those of other civic society organisations across the island – on abortion and legislative reform.

During the online discussion element of this study, we noted with interest the role of experience in modifying views on abortion. Participants found that knowing of and listening to people’s first-hand accounts caused them to reflect on their own positions.

This finding indicates the importance of listening to experience of abortion in any future debates, and concurs with outcomes of the recent Citizens’ Assembly process in the Republic of Ireland (see Appendix 1). It also signals the potential value of more union-wide debate, internal and public, on the topic.

Abortion as a Workplace Issue is an essential and overdue piece of trade union research. In the words of one survey participant: “[it] is a perfect example of what unions can do to engage women … drawing out the issues that impact on women directly.” Our movement has a long tradition of promoting and defending equality in the workplace, particularly gender equality. This study is a continuation of that tradition and goes some way to shedding a light on how we, as a movement, can work together to ensure full equality not just for women workers but for all women living on the island of Ireland.