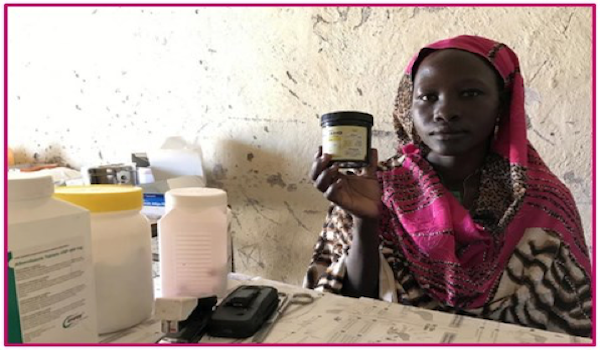 In December 2016, two Human Rights Watch researchers interviewed 90 people in rebel-held areas of Heiban, Delami and Um Dorein counties, including 25 in-depth interviews with women and girls about their access to reproductive healthcare. Researchers also spoke with witnesses and victims of abuse, local rebel authorities, and humanitarian aid workers. This research builds on findings from five earlier Human Rights Watch investigations in the Nuba Mountains region, hilly areas of Sudan’s Kordofan area where communities from different Nuba tribes live, between 2011 and 2015.

In the photograph above, Mukuma Hamad, a volunteer health worker, holds a container of folic acid, the only assistance she can give pregnant women who visit the lone health clinic in Hadara village, in rebel-controlled Southern Kordofan. Most of the women we interviewed did not know what a condom was and had not heard about other options for contraception. NGO workers, health workers and authorities told Human Rights Watch that condoms are rarely available in markets despite an increase in gonorrhea and syphilis cases over the past two years and high percentages of pregnant women testing positive for hepatitis B. Women and girls are unable to protect themselves from sexually transmitted infections or control their fertility.

Most pregnant women must rely on local birth attendants who have no formal training, or trained midwives who have not been able to acquire new or sterile equipment since the conflict began. Women and girls experiencing complications during labor may have to travel for days, often on dangerous routes, including across frontlines, to get emergency obstetric care.

Family planning is not available except in rare instances. The rebel SPLM/A-North administration provides the bulk of health care through a network of some 175 clinics, but these do not distribute contraception, including condoms. One agency provides three-month injectable contraception but restrictions imposed on them by the local rebels require patients’ husbands to give permission before they can provide the contraception to women.