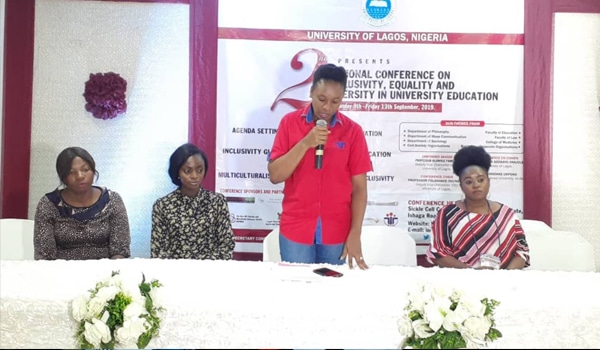 At the recent NationalConference on Inclusivity, Equality & Diversity in University Education,hosted by the University of Lagos, a speaker from the Society for Family Healthsaid that Nigeria would move closer to achieving major targets in theSustainable Development Goals by assuring adolescent girls access to health andcritical social services. The Deputy Project Director of Adolescents 360, FifiOgbondeminu, supported this and talked about promoting social inclusiveness andreducing unplanned pregnancies and unsafe abortions among adolescent girls andyoung women. A good starting point, she said, would be to review and implementthe National Policy on Integrating Youth-Friendly Services into ExistingPrimary Health Care Centres. She urged the federal and state governments toupscale safe spaces for adolescent girls in more PHC facilities.

Adebusola Odulaja, RegionalCoordinator of the A360 Project, called for training of service providers inmore primary health care centres and in adolescent-friendly clinics, becausegirls complain of having to travel long distances to these facilities, and are then often turned away andrefused access to services.

Nigeriahas some of the world’s most restrictive abortion laws. Nevertheless, anestimated 2.7 million abortions take place each year, the majority of which arein dangerous conditions, with poor, uneducated women and girls most at risk.

Innorthern Nigeria, health and aid workers say unsafe abortions have surged sincethe start of the Boko Haram conflict in 2009, which has driven some 1.8 millionNigerians from their homes. At least 40 women and girls come in for emergencypost-abortion care each month, according to Aminu, a senior nurse in a busygovernment clinic in Yobe state. Mortality rates inthe northeast – where clinics and hospitals have been destroyed by armed groups– are the worst in Nigeria, government data show. Women and girls go topharmacies, vendors of locally made drugs and older women to terminatepregnancies, using medication, herbs or tools like sticks, Aminu said.

Onewoman with five children who received post-abortion care said: “Men say it’simmorality. But they are not the ones who have to give birth and look after thebabies. When your children are telling you they are hungry, how can you haveanother one?” Fetuses are often found in the camp’s toilets, she said.

Withmany husbands missing, detained or dead, more women are having sex outsidemarriage, aid workers said. While some women choose to get into newrelationships, the United Nations has recorded thousands of cases of sexualviolence and transactional sex, particularly reported by women and girls wholack food, shelter or money.

Yet Nigerianofficials insist the law on abortion is upheld.