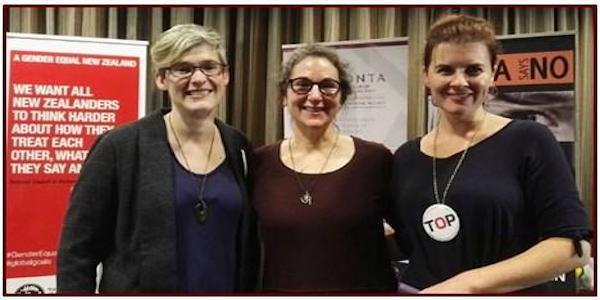 In 2015, 57% of women having an abortion in New Zealand had already had one or more previous live births. Abortion access is therefore absolutely an issue for mothers.

When I was about 10 years old, writes Jessica Hammond Doube, my parents took me to an anti-abortion protest. As a good Catholic schoolgirl, I enthusiastically took up my placard, believing it was obvious that abortion was murder.

And then a few months ago I became a political candidate. One of my priorities: getting abortion removed from the Crimes Act

What happened in the intervening years? I saw what happens when real women have unwanted pregnancies. I saw desperately wanted pregnancies with really sick babies. I studied bioethics and read countless arguments about the moral status of a fetus. I learned about concepts like the right to bodily integrity. I had my own babies and saw the unimaginable physical, emotional and financial toll having babies can take. In short, I grew up.

I think it’s time New Zealand had a grown-up conversation about abortion. Here are a few things we might want to talk about:

+ Surveys show that most New Zealanders think abortion should be legal in most circumstances.

+ In fact, abortion is only legal in a narrow range of circumstances. Most women procure abortions by saying their mental health is at risk. Most of the time this is probably a lie.

+ About one in four New Zealand women have had an abortion.

+ Women have to wait, on average, 25 days to have an abortion from the time when they first see a doctor to get one. That’s almost a month of carrying a pregnancy that they want to end – with all the physical and emotional costs that entails… The delays are, for the most part, completely avoidable and are caused by the unnecessary hoops women have to jump through.

While I was writing this, a friend rang me to tell me she was pregnant and was struggling to jump through the hoops to get an abortion… She has so far had two internal examinations and a blood test. She’s had to pay for an ultrasound, where the sonographer made her listen to the heartbeat and gave her a link to the photos. She has been offered a session with a social worker an hour’s drive from where she lives, but she can’t take leave from work to get to the appointment. She hopes she can find the two certifying consultants she needs to see soon – and locally. She knows the delays mean she will pass the 9-week limit on getting a medical abortion so she will need to have a surgical one.

Meanwhile she is trying to take care of her other young children with the usual sickness and exhaustion that goes with first trimester pregnancy. At every stage of the abortion process she feels she is being judged. She worries she will fail one of the hurdles and be one of the 200-plus women a year who are denied an abortion.