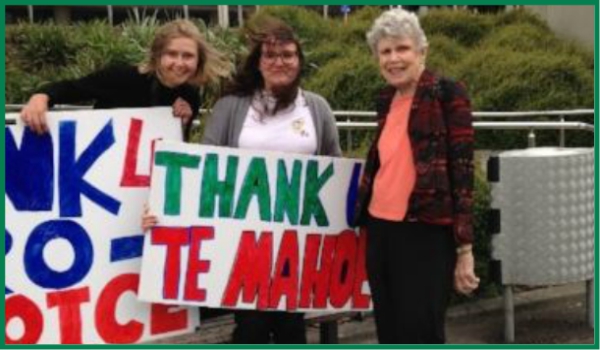 The Abortion Law Reform Association of NZ had a busy year. They launched a new website, which includes information about doctors who refuse to provide reproductive health services; released the results of a poll commissioned in January that revealed the majority of New Zealanders are pro-choice in all circumstances; organised counter-demonstrations against anti-abortion types who were harassing women outside abortion clinics; appeared on a TV talk show with the then Prime Minister who was less than supportive of abortion law reform;

They organised #40daysfortruth on abortion around Easter to counter anti-abortion lies. Each day, they posted one true fact on Facebook, and tweeted it at @alranztweets. They carried on the tradition of treating abortion providers with flowers, candy, and cookies to thank them for their work.

Regarding their national elections, they said this: “At first the election looked like lots of elections before it. MPs and candidates down the ticket professed support for reproductive rights, but everyone expected the party brahmins to do bugger all about it. And then came Jacinda.
“In the leaders debate in September, now-Prime Minister Jacinda Ardern came out in support of taking abortion out of the Crimes Act and allowing New Zealanders access to abortion as a matter of right. And now we have a Labour government. Abortion is on the unofficial schedule for late next year, but to date the government has done bugger all about it.
“We at ALRANZ consider it our mission to keep reminding the government, and to work toward law reform we can live with long term, because we will likely have to.”

And they did much more.