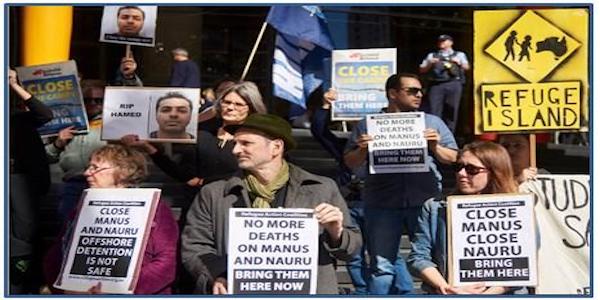 Asylum seekers and refugees seeking abortions surgery and other treatment have been prevented from having overseas transfers for health care by a Nauru hospital committee.

The Pacific islands of Nauru and Manus Island were opened in 2012 as detention centres for offshore processing of asylum seekers who arrive in Australia by boat. According to the Guardian: “They have been plagued by allegations of violence, including murder; sexual predation of men, women and, in particular, children; medical neglect leading to death; high rates of suicide and self-harm; and other human rights abuses.”

At least three women seeking to terminate a pregnancy are among those being refused treatment in Australia, in defiance of doctors’ recommendations. Abortion is illegal on Nauru.

Politically, the news report says, there is resistance from the Australian government to refugees and asylum seekers being taken to Australia for tertiary care. A staff member on Nauru told the Guardian there was no other reason to give the Nauru hospital committee final authority over the transfer.

“In the past, some women who went to Australia for terminations sought injunctions and are now living in community detention in Australia. Some others declined the termination once they reached Australia, secured an injunction and have since given birth to their child. Not all women did this, some returned to Nauru after their termination. The Australian Border Force needed another step in the process, to prevent women from travelling to Australia. Now that requests for terminations must be submitted to the OMR committee, it is guaranteed that approval will not be given. Women are being denied the right to end their pregnancy.”

The staff member said medical professionals on the island held deep concerns for the well-being of the pregnant women, and for anyone else who sought a termination in the future. “These women already have significant mental health problems. Giving birth and raising a child in Nauru would only increase their mental health burden. I am concerned that these women will self-harm, attempt suicide, or attempt a home abortion. One of the women is now 15 weeks pregnant. For this woman, there is only five weeks left in which to end her pregnancy. If things do not change, these women will unwillingly become mothers, if they do not kill themselves first.”

Australia’s handling of pregnancies among the refugee and asylum seeker community on Nauru has also been controversial when transfers for women about to deliver with life-threatening complications are requested. Babies born in Australia to women moved from offshore detention to deliver are regarded as “illegal maritime arrivals”, despite having never been on a boat nor been anywhere except Australia.