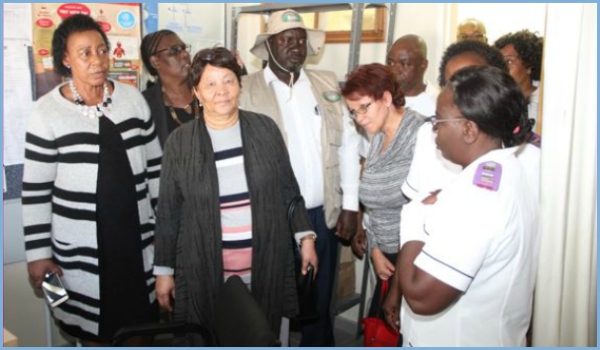 In May 2018, five months into the school calendar year, the Oshana and Ohangwena regions have recorded 232 pregnancies, some in girls as young as age 14. The parliamentary standing committee on gender equality, social development and family affairs released these figures during consultative meetings held in the region, where they sought input from pupils, teachers, parents and other community members on teenage pregnancies. This took place after Popular Democratic Movement parliamentarian Elma Dienda had tabled a motion on the matter in the National Assembly.
Of the pregnancies recorded in one region, 97 of the girls are in school, while 35 have dropped out.

Last year, the Oshana region alone recorded 312 pregnancies. Last year, the Ohangwena region recorded 433 pregnancies.
These findings are despite the implementation of the Education Sector Policy for the Prevention and Management of Learner Pregnancy a few years ago. During the discussion at the consultative meeting, participants agreed that while the policy may be all good, the implementation process has been unsuccessful. Under the policy, a girl may choose to continue with her education until four weeks before giving birth, and can continue with her schooling after giving birth, provided she is in a good state of health, and that the infant will be cared for by a responsible adult. Some teachers and parents felt the policy encourages teenagers to continue bearing children without being concerned.
The need to sensitise school management on the implementation of the policy was raised, and it was proposed to hold parents’ meetings for parental education, and to advocate the policy. But the pupils themselves feel both parents and teachers have failed them. One secondary school pupil said that although the teaching of Life Skills is compulsory from Grades 4 to 12, neither pupils nor teachers take the matter seriously as it is non-promotional.
One boy said boys should also be held accountable so that when a girl falls pregnant, the boy should be told that he too is expecting, as girls do not make themselves pregnant. He said television soap operas are also influencing teenagers to engage in early sexual activities which lead to pregnancy. But although DSTV has added the parental guidance function to its packages, one pupil said parents do not activate it: “When they find you watching sex scenes, they become angry and ask whether you cannot read that it is age-restricted, and that parental guidance is advised. But I am not supposed to do parental guidance myself,” he said.

One school principal believed the policy is so permissive as regards staying in school and returning right after the birth that it encourages rather than discourages teen pregnancies. “To make things worse, an organisation called FAWENA provides them with financial support which entices others to follow suit.” He called for a review of the policy.

A long-serving senior medical officer at the Oshikuku District Hospital further noted challenges such as that malnutrition has increased due to young mothers who leave their babies in the care of their grandmothers, who may be unable to provide the necessary care. He felt they should be compelled to take a break and breastfeed their babies for at least a year.

In other regions visited by the committee last year, the policy was also criticised over what was seen as selective justice, which apparently singles out only male teachers and not males from any other profession in calls for their dismissal for impregnating schoolgirls.